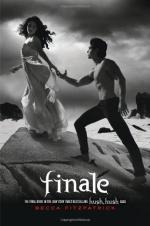 Becca Fitzpatrick
This Study Guide consists of approximately 25 pages of chapter summaries, quotes, character analysis, themes, and more - everything you need to sharpen your knowledge of Finale.

Finale is the final book in the Hush, Hush Series by Becca Fitzpatrick. In Finale, Nora Grey has become the leader of the Nephilim army after the death of the Dark Hand. The Nephilim do not know Nora and do not trust her. Hence, Nora finds herself placed in a position of proving herself to her own people. It does not help that Nora's boyfriend, Patch, is a fallen angel and a sworn enemy of the Nephilim. Nora must find a way to make peace between her people and the fallen angels without breaking her vow or losing Patch. Finale is a tension filled novel that will satisfy the conflict developed in the previous Hush, Hush books.

Nora Grey has become leader of the Nephilim army in the aftermath of the Dark Hand's death. This is a role that Nora neither wants or needs. In fact, all Nora wants is to make peace between the Nephilim and fallen angels so that she and her boyfriend, Patch, can live in peace. Unfortunately, she made a blood vow that she would lead the army and the consequences of breaking this vow will lead not only to her death, but her mother's as well. At the same time, Nora owes the archangels peace for their help in killing her biological father, Hugh Millar, the Dark Hand.

Nora inherits her second lieutenant, Dante Matterazzi, from the Dark Hand. Dante wants to improve Nora's reputation with the Nephilim by making it appear that she has a strong, upstanding Nephilim to replace her fallen angel boyfriend. Dante volunteers himself as the best candidate and Nora finds herself forced to accept. Nora and Patch discuss this plan and decide it is for the best. For this reason, they limit the amount of time they spend out in public together.

Dante insists on training Nora, to help her build the strength and stamina that natural born Nephilim come to naturally. In order to do this, Nora must buy new running shoes. While she is out making this purchase, Nora is kidnapped by three Nephilim. Nora manages to escape and Patch comes to her rescue, thanks to a tracking device he placed in her jacket. However, Nora is unsettled by this and decides to go forward with Dante's plans. Nora and Patch stage a public fight to get the word out that they are no longer together.

Nora witnesses an archangel, whom she believes is trying to chain Patch in hell, speaking with Patch's former girlfriend, Dabria. Nora suspects this means that Dabria is blackmailing the archangel, Pepper, and this is why Pepper is after Patch. Before Nora can do anything about this situation, a group of fallen angels march into the bar and try to force Nephilim to take the oath of fealty to them, to allow them to possess their bodies during Cheshvan. Nora and her friend, Vee, escape before the fallen angels see them.

The following day, Pepper tricks Nora into leaving school to meet him. Nora thinks she is meeting Patch. When Pepper tells Nora he is kidnapping her to trick Patch into coming after her, Nora discovers that a drink Dante gave her that morning has given her such strength that she cannot help but escape him. Nora later confronts Dante and he tells her the drink is enchanted with devilcraft, that he has been working with a Nephil who has been working on a weapon enchanted with devilcraft that can kill a fallen angel.

Nora immediately tells Patch about the devilcraft, which is illegal on earth by archangel law. They begins to hunt for the man, Blakely, who is working with it. They find him at a football game, but Marcie Millar, Nora's half-sister, interferes and warns the man off. Blakely stabs Nora with a knife enchanted with devilcraft, leaving her with an addiction to it. Blakely exchanges the knife for the antidote, but Nora does not take it. Instead, she becomes addicted and allows Dante to feed it to her.

Nora and Patch finally confront Pepper with a sting operation of their own design and promise to help him stop the person blackmailing him. Nora thinks it is Dabria, but is shocked to find it is Dante. Dante has turned traitor and is working with the fallen angels to control the Nephilim. Nora tries to stop him, but fails. Dante then calls a meeting with the Nephilim leaders. Nora thinks he will make her look like a traitor, so she calls a meeting of her own and challenges him to a duel. However, the night before the duel, Nora learns that Marcie was also working with Dante and that they have burned all the fallen angel's feathers, sending them all to hell, including Patch.

Nora is so depressed she almost does not go to the duel. However, when she arrives, she discovers that Dante has opened the gates of hell and forced all the fallen angels to swear a vow to him. Dante brings his army out of hell and begins slaughtering the Nephilim. Nora takes on Dante and wins, but only after the loss of her friends Scott. With Dante's death, everything sustained by devilcraft also dies, including all the fallen angels. Nora reunites with Patch and they vow to each other. This vow that allows Patch to regain feeling.

More summaries and resources for teaching or studying Finale.