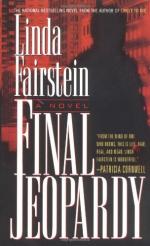 Linda Fairstein
This Study Guide consists of approximately 30 pages of chapter summaries, quotes, character analysis, themes, and more - everything you need to sharpen your knowledge of Final Jeopardy.

This detailed literature summary also contains Topics for Discussion and a Free Quiz on Final Jeopardy by Linda Fairstein.

Alexandra Cooper, or Alex as her friends call her, is a New York City prosecuting attorney who works specifically on sex crimes cases. Alex had never intended to remain on the prosecutor's team but is wealthy in her own right, meaning she can live in the manner she chooses without depending on the salary from her job to support her. She loves clothes and lives in a secure high-rise apartment. She has a wealth of friends and is dedicated to her job.

Alex is friends with an actress, Isabella Lascar, and learns that Isabella has been murdered near Alex's house on Martha's Vineyard. The initial fear is that someone had meant to shoot Alex and had killed Isabella by mistake. It takes some investigation, including by Alex's friend, police officer named Mike Chapman, before Alex is convinced that she wasn't the target at all. The investigation then turns to who would have killed Isabella. Alex thought that Isabella was borrowing her house on Martha's Vineyard in order to spend some time alone, but discovers that she'd actually been with a man. The man's identity remains a mystery until someone sends police copies of photos taken of Isabella during her trip to Martha's Vineyard. It's Alex who recognizes the arm of the man as belonging to her boyfriend, Jed Segal.

Alex confronts Jed for his betrayal but Mike believes that Jed had something to do with Isabella's death. With her relationship in shambles, Alex is forced to focus on her job which includes an ongoing investigation into the quest for a serial rapist. When the rapist is captured, Alex works with police on the case but the death of Isabella is never far from her mind.

Meanwhile, Alex is working with a freelance reporter, a woman named Ellen Goldman, who is working on a profile article about Alex. Ellen is somewhat pushy but seems harmless until the day she offers Alex a ride home. She takes Alex to an area of the park where a rape had been committed with the intention of killing Alex and making it seem that a man she'd prosecuted had taken revenge on her. Ellen then reveals that she had also killed Isabella and that her objective is to remove both Alex and Isabella from Jed's life, believing that Jed would return her affection if she eliminated the other two women. It's only then that Alex learns that Ellen had been the woman convicted of stalking Jed months earlier in California and that her obsession had taken her across the country to New York.

More summaries and resources for teaching or studying Final Jeopardy.