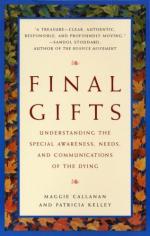 Maggie Callanan and Patricia Kelley
This Study Guide consists of approximately 28 pages of chapter summaries, quotes, character analysis, themes, and more - everything you need to sharpen your knowledge of Final Gifts.

Final Gifts: Understanding the Special Awareness, Needs and Communications of the Dying Summary & Study Guide includes comprehensive information and analysis to help you understand the book. This study guide contains the following sections:

This detailed literature summary also contains Topics for Discussion on Final Gifts: Understanding the Special Awareness, Needs and Communications of the Dying by Maggie Callanan and Patricia Kelley.

The text considers the phenomenon the authors term Nearing Death Awareness. It is a concept encapsulating a host of psychological, physical, and metaphysical traits, which are exhibited by terminally ill patients in the weeks and days preceding death. The phenomenon is related to, but distinct from, the Near Death Experience. In Nearing Death Awareness, patients approaching death typically display up to four unique behaviors: they prepare to travel to another location; they perceive the presence of non-physical beings; they perceive the existence of a non-physical destination; and the demonstrate prescience about the date, and often time, of their death. These generalized behaviors appear to span multiple religious, racial, social, and cultural groups and are experienced equally by both genders and all age groups.

The authors are hospice healthcare practitioners with decades of combined experience in caring for the terminally ill. Their personal experience is substantively bolstered by accumulated experiences of other healthcare practitioners as well as by the experiences of patients and patients' families. This vast experience is synthesized into a cohesive definition of the dying process. Beyond the simple physical and medical processes involved in dying, the authors argue that death, like birth, is a fundamental aspect of life, which can be approached as a positive and constructive element within its obvious limitations. Nearly all patients approaching death exhibit an identifiable suite of experiences that defy medical consideration and that are distinct from typical everyday experiences. The authors propose the phrase Nearing Death Awareness to describe these experiences. The major theme of the text is the definition of Nearing Death Awareness and a consideration of its implications.

The text is divided into three named sections, each consisting of three to seven named and enumerated chapters. The introductory section defines Nearing Death Awareness and presents background information. It serves as an introduction to the concepts considered in the remainder of the text as well as providing background on hospice care and the social evolution of ideas about death and dying. The second section details four broad experiences that, taken together, comprise Nearing Death Awareness. First, most patients approaching death perceive their condition as being analogous to physical travel; many prepare for death by packing suitcases or locating passports. Second, nearly all dying patients perceive the presence of non-physical, or unseen, beings. Often loved ones, these unseen visitors bring comfort and peace to the dying. Third, dying patients usually perceive a distant location which is non-physical and not part of the natural world. This supernatural location is often described as peaceful, warm, and full of bright white light. Fourth, those near death frequently display a surprising prescience about the date and often the very hour of their impending death. This prescience defies medical examination and, in fact, is often counter to medical predictions though it is usually accurate. The final major section of the text presents six major aspects of life and death, which are often troubling to the dying. These concerns often focus on things left unfinished in life; the dying often need assistance in completing tasks or perceived tasks before they can pass away in peace. The section offers numerous suggestions on how to successfully interact with the dying and how to alleviate their mental and emotional suffering regarding things that they perceive remain to be accomplished.

More summaries and resources for teaching or studying Final Gifts: Understanding the Special Awareness, Needs and Communications of the Dying.

Final Gifts: Understanding the Special Awareness, Needs and Communications of the Dying from BookRags. (c)2022 BookRags, Inc. All rights reserved.