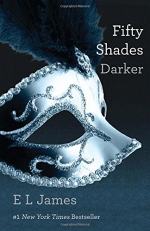 E. L. James
This Study Guide consists of approximately 51 pages of chapter summaries, quotes, character analysis, themes, and more - everything you need to sharpen your knowledge of Fifty Shades Darker.

Fifty Shades Darker, E. L. James’ sequel to Fifty Shades of Grey, is an erotic romance novel related from the first-person perspective of protagonist Anastasia (Ana) Steele. Christian Grey and Anastasia Steele have not seen each other for several days, following a sexual encounter that frightened Ana. Ana has begun a new job and Christian contacts her by email, asking if she still wants to attend an art show for her friend, Jose. Ana is surprised but agrees. At the show, Christian is surprised to see a series of photos Jose took of Ana. In those photos, Ana seems happy and relaxed. Christian buys the photos and admits that he wants to be responsible for making Ana look like that. On the way home, he convinces her to give him another chance.

Over the coming days, they spend time together. Ana discovers that Christian has bought the company she works for and she is upset. He says he wants to keep her safe, and that he will buy any other company that employs her. Ana's boss becomes pushy toward Ana, and makes a pass at her. Ana kicks him and rushes away. When Christian finds out, he orders Jack fired.

Christian begs Ana to promise never to leave him. He promises they will engage only in “vanilla” sex, avoiding any dominance and submission. Ana fears that he will not be happy with that situation for the long term. She also knows that he has secrets. She soon discovers that one of them is that Christian's biological mother stood by while her pimp beat Christian and put cigarettes out on Christian's body. He spent days in an apartment with his mother's body after her death. His adoptive mother was a doctor on duty at the hospital after police found Christian and his mother. These are the reasons he fears being touched and has nightmares.

Elena is a friend of Christian's mother. When Christian was a teenager, Elena had sex with him, teaching him about submission and dominance. Until Ana, Christian's only relationships were contractual with him in the role of the dominant. Ana knows these things, but knows that Christian also has an additional secret. She is beginning to feel hopeful about their relationship until Christian reveals that he is a sexual sadist and that all his submissives resemble his mother.

Ana is horrified at this revelation. Later, she talks with Christian's psychiatrist, Dr. Flynn. He assures her that dominant sex was a coping mechanism that is no longer necessary. He reminds Ana that there are no guarantees in life, but believes that Christian can have a healthy sex life within Ana's boundaries.

Christian has proposed by the time he and Ana talk with Dr. Flynn, and Ana agrees to marry him. They gather at the home of Christian's parents to celebrate Christian's birthday, and he makes the announcement. Elena manages to get Ana alone, and she is furious. She says Ana will never be able to satisfy Christian. Ana, by now certain of her future with Christian, throws a drink on Elena just as Christian enters. He and Elena argue, but Christian's mother, Grace, interrupts them. She hears enough to know that Elena had a sexual relationship with Christian when he was a teenager. She slaps Elena and orders her out.

Once things have settled down, Christian proposes properly to Ana. Meanwhile, a man is watching them, and planning his revenge. It is Jack, and he was responsible for Christian's helicopter crash. He is angry that Christian survived, but pledges to get even.