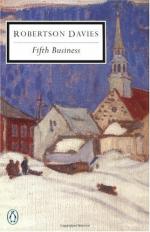 Fifth Business is a story masquerading as a memoir. Dunston Ramsay is a newly-retired headmaster who writes to the new headmaster to object to the dismissive tone in which his career was characterized by the speeches at his retirement banquet. Ramsay objects particularly to the article in the College Chronicle, which treats him as a doddering old school-marm who had not made any contribution to his field.

Ramsay therefore describes the history of his intellectual career, which was specifically focused on the history and culture surrounding saints. As he is telling the story of his interest and research in saints though, Ramsay also narrates the stories of Percy Boyd Staunton and Paul Dempster and his mother, Mrs. Dempster. Staunton and Paul Dempster were both childhood friends of Ramsay’s and he tells the story of Staunton’s rise to fame and fortune, and Paul Dempster’s rise to prominence as a magician. In the end, their stories all intersect, and resolve a traumatic childhood episode. Percy Boyd Staunton had thrown a snowball at Ramsay, but it hit Mrs. Dempster, and caused her to go into labor prematurely, which had a lifelong effect on Paul Dempster, her son. By the end of the story, some retribution has been achieved and the author has defined something like a moral vision.

The subtext of Fifth Business develops out of the rivalry between Ramsay and Staunton. Staunton is the child of a wealthy family, while Ramsay is the son of strict Scots parents who run the local newspaper. Things come easily to Percy Boyd Staunton, but Dunston Ramsay takes things seriously and tries to be conscientious. When Mrs. Dempster delivers Paul Dempster early, Dunston takes it upon himself to look after the boy, and he looks in on Paul and his mother even when they have become scandalous characters in the town of Deptford where they all live.

When his mother forces Ramsay to choose between loyalty to her and his visits to Mrs. Dempster, he enlists, and ends up losing a leg in the battle of Paschendale in the Great War. Coming home with the Victoria’s Cross, he learns to play the role of the hero according to other people’s expectations, and he takes up the study of saints as a lifelong passion. This introduces him to Padre Blazon, an old Spanish monk who is very wise and can look at the history of religion as an optional vocabulary for his own personal experiences. He and Ramsay, who is a Protestant, discuss the possibility that saints might not be canonical figures but, rather, are regular characters in everyone’s lives. They are simply the people who fill the need for the miraculous.

Devoted to saints, Ramsay lives slightly vicariously through Boy Staunton and his wife Leola, and their marital problems seem to put him off desiring marriage for himself. Ramsey prefers instead to be a secondary figure in other people’s lives. This lifestyle is challenged when Ramsay meets Paul Dempster again, in Mexico. Paul is going under the name Magnus Eisengrim, and Ramsay has an encounter with Eisengrim’s manager, an ugly but intelligent woman named Liesl Vitzlipützli. She tells him to confront his devils, and his devils’ father, the Old Devil, and to live in accord with inner nature, even if it is conflicted.

Fifth Business concludes when Eisengrim meets Boy Staunton at Ramsay’s school, and the three men have a combative meeting. Ramsay tells both men the story of Paul Dempster’s early birth: it resulted from the snowball Percy Boyd Staunton had thrown at Dunston Ramsay. Ramsay even produces the stone that was in the snowball, which he had been using as a paperweight all these years.

After the meeting between Ramsay, Eisengrim and Staunton, Staunton gives Eisengrim a ride home, but presumably hypnotizes him along the way, because Staunton drove his car into Toronto Bay at high speed, and the stone from Ramsay’s desk was found in his mouth. The murder is never solved, and the book ends with Liesl inviting Ramsay to come visit her in Switzerland for some high times. This, Ramsay says to the headmaster, is the last thing for him to tell.