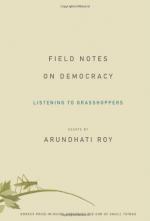 India is the central setting and reference point for all of the essays. The India described in Field Notes on Democracy is marked by a number of hypocrisies and contradictions. While India purports to be democratic, Roy shows how India nonetheless uses anti-democratic violence, curfews, and propaganda to suppress the rights of its citizens. While India purports to be secular, Roy shows how Indian politicians have become increasingly pro-Hindu. Roy often refers to India as “the world’s favorite new superpower” (4).

“India Shining” (57) is a term that Roy uses to draw attention to the vast disparities of wealth and experience in India. While many Indian citizens are becoming poorer and poorer, a small portion of the population in “India Shining” is becoming richer and richer. In a nod to growing privatization, Roy refers to this phenomenon as “India Private Limited” and “India the Public Enterprise...