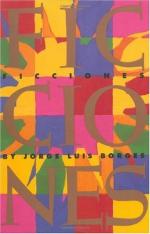 The First Encyclopedia of Tlonappears in Tlon, Uqbar, Orbis Tertius

The First Encyclopedia of Tlon is the book the narrator finds among his friend Herbert Ashe's belongings that brings Tlon to his attention and sends him on the quest to find out everything he can about Tlon.

Don Quixote is a novel written in the eighteenth century by Miguel de Cervantes.