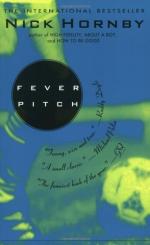 Nick Hornby
This Study Guide consists of approximately 33 pages of chapter summaries, quotes, character analysis, themes, and more - everything you need to sharpen your knowledge of Fever Pitch.

Football is a sport where two teams of players try to score by putting the ball in the other team's goal without using their hands. It is called soccer in America.

The Home Counties are a suburb of London, England, where Nick Hornby lived as a child with his mom and sister.

Wembley is the main football stadium in England, where national team games and cup finals are frequently played.

The West Stand is a section of the stadium at Highbury. The tickets for this section are more expensive and more affluent, middle-class people tend to sit there. Nick Hornby sits in this section when he goes to games with his dad.

Schoolboy's Enclosure is a section of the stadium at Highbury. The tickets for this section are cheap...

More summaries and resources for teaching or studying Fever Pitch.