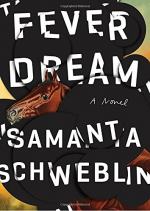 Samanta Schweblin
This Study Guide consists of approximately 36 pages of chapter summaries, quotes, character analysis, themes, and more - everything you need to sharpen your knowledge of Fever Dream.

The following version of this book was used to create this study guide: Schweblin, Samanta. Fever Dream. Riverhead Books, 2014.

Amanda is paralyzed in a hospital bed, and she is talking to David, her neighbor’s son. David reminds Amanda about the importance of the exact moment in which the worms that Amanda felt crawling inside her body first appeared, so Amanda begins to tell David how she got sick.

Amanda tells David that she had taken a holiday away from the big city with her husband and her daughter, Nina. In the countryside, she meets her neighbor, Carla. Carla had become worried, because her son, David, had drunk some contaminated water from a river, so without any other hope, she took David to a witch doctor. The witch doctor told Carla that the only way to cure David was to swap his soul with someone else’s. Carla agreed, and soon, David started showing signs of improvement. However, his personality was different. David began luring animals to their death, and he sobbed as he buried them. Moreover, David was unresponsive to his mother, so Carla began to resent David.

After this anecdote, David tells Amanda that this information is not important, and that she should proceed with the story, so Amanda abides by his demand. Amanda tells David about her day out with her daughter, Nina, but David tells her that this story is not relevant to the worms. Amanda then tells David about her rescue distance, which is a mechanism her mother taught her which helps protect her daughter, and David says that the rescue distance is important.

Amanda recalls leaving Nina in the house before exploring the surrounding area. She tells David that when she returned to her house, she saw Carla waiting outside. Carla looked perplexed, and told Amanda that David was inside. Amanda panicked, and rushed inside looking for Nina. She found Nina looking frightened, with David in the same room, standing motionless and expressionless. Amanda yelled at Carla, ordering her to leave the house. Carla abided, and Amanda tried to make David leave too. David did not pay attention, but he eventually left on his own.

Amanda tells David that this experience gave her a nightmare in which David had possessed Nina’s body, then Amanda tells David that she decided to return to her home in the city after the traumatic day’s events. Amanda recalls the day following this incident, and tells David that she drove to Carla’s office to say goodbye. While Amanda and Nina were at Carla’s office, they got sick by sitting on some contaminated grass. As their conditions worsened, Carla took Amanda to the hospital, and took Nina into her own care. Carla then told Amanda that the doctors could not help Nina, so Carla was going to take Nina to the witch doctor who saved David. Despite Amanda’s objections, Carla left the hospital bed, and Amanda was left alone. The novel ends with Amanda pleading to David, asking him what the important thing in the story is, but he never reveals the answer to her.

More summaries and resources for teaching or studying Fever Dream.