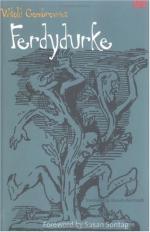 Witold Gombrowicz
This Study Guide consists of approximately 41 pages of chapter summaries, quotes, character analysis, themes, and more - everything you need to sharpen your knowledge of Ferdydurke.

This detailed literature summary also contains Topics for Discussion and a Free Quiz on Ferdydurke by Witold Gombrowicz.

Ferdydurke follows the story of Joey, a thirty-year-old writer who is struggling with his own immaturity. Professor Pimko turns Joey into a seventeen-year-old by "belittling" him and sends him off to a school. Joey struggles to regain his adulthood, extricating himself from a crush on a schoolgirl only to be drawn into his friend Kneadus's search for an ideal farmhand. Joey is drawn into a class struggle on his uncle's estate, where Kneadus finds his farmhand, and only finally escapes into a faked love with Zosia, his distant aunt's daughter.

As the novel begins, Joey is thirty years old and still struggling to gain maturity. Joey begins writing a novel to express himself when Professor Pimko comes in and snatches it to look at. Through belittling Joey, Pimko turns him into a seventeen-year-old and takes him away to a boy's school. At the school, Joey befriends Kneadus, a violent youth who hates idealism and being categorized as innocent. Kneadus longs for a simple farmhand, and he attacks and destroys the innocence of the idealist Syphon, another schoolboy.

The novel is interrupted by the story of Filidor, a professor of synthesis who battles his nemesis anti-Filidor the analyst. The analyst breaks apart Filidor's wife, sending her to the hospital. Filidor then synthesizes anti-Filidor's lover, and the two agree to duel. In the duel, the two men shoot apart each other's loves, leaving both men childishly insane.

Joey goes to live with the Youngbloods and their schoolgirl daughter. Pimko places him in the house so that Joey will fall in love with the schoolgirl and want to remain a youth. Joey does fall for the schoolgirl, and seems trapped. To escape, he degrades the schoolgirl by tricking a modern boy and Pimko to show up at her window in the middle of the night at the same time. The girl's parents discover both the old man and the young boy hiding in their daughter's room, and the result is a brawl. Joey leaves, but he is waylaid by Kneadus, who leads Joey off to find a farmhand.

The novel is interrupted again by the story of Filibert, a marquis who, after a bizarre turn of events resulting in all the men at a tennis match jumping on the women and riding them, challenges anyone who will insult his wife. It ends in his wife's miscarriage, and the marquis's embarrassment at his own childishness.

Joey and Kneadus find that all the villagers have turned themselves into dogs to drive off outsiders. They end up going to Joey's aunt and uncle's estate. There, Kneadus finds his farmhand, the valet. Kneadus makes a fool of himself befriending the servant. The uncle is horrified and plans to fire the valet and kick out Kneadus. Kneadus plans to run away with the valet in the night, but the uncle interrupts the plan. A brawl ensues, involving the uncle and aunt, the valet, Kneadus, and all the local peasants. Joey escapes, running into his aunt's daughter Zosia. Unable to face the truth of what happened, Joey convinces her that he's in love with her and has kidnapped her. They run off together.

More summaries and resources for teaching or studying Ferdydurke.