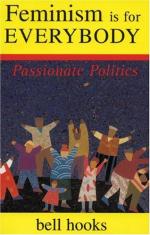 Feminism Is for Everybody: Passionate Politics - Feminist Politics: Where We Stand Summary & Analysis

Bell hooks
This Study Guide consists of approximately 27 pages of chapter summaries, quotes, character analysis, themes, and more - everything you need to sharpen your knowledge of Feminism Is for Everybody.

Feminist Politics: Where We Stand Summary and Analysis

The goal of feminism is to end all forms of sexism, sexist exploitation and oppression. Feminism does not target men as its enemy; rather, it is the structure of the society with which it is at odds. Unfortunately, through the years, that goal has been morphed and tarnished.

Firstly, mass media which is run by white men, only felt comfortable covering certain portions of the feminist message; i.e., equal pay, equal opportunity, and the sharing by men of household and parental duties. Since American society is primarily Christian, there was a long-standing sentiment—even among some women—that male domination of our society was appropriate and expected.

Initially, in the feminist movement there were explosions of anger towards men, but that anger was misdirected from its true foe—sexist...

(read more from the Feminist Politics: Where We Stand Summary)

More summaries and resources for teaching or studying Feminism Is for Everybody: Passionate Politics.

Feminism Is for Everybody: Passionate Politics from BookRags. (c)2022 BookRags, Inc. All rights reserved.