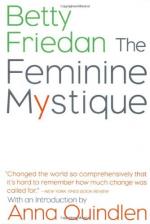 Introduction & Overview of The Feminine Mystique

This detailed literature summary also contains Bibliography and a Free Quiz on The Feminine Mystique by Betty Friedan.

When Betty Friedan's The Feminine Mystique was first published in the United States in 1963, it exploded into American consciousness. Since its first publication, critics and popular readers have been sharply divided on their assessment of the work. However, one fact is certain: The Feminine Mystique sparked a national debate about women's roles and in time was recognized as one of the central works of the modern women's movement. Friedan began writing the work after she attended her fifteen-year college reunion at Smith, a women's college. At this reunion, she gave a questionnaire to two hundred of her fellow classmates, and the results confirmed what she had already suspected— many American women were unhappy and did not know why. After three women's magazines refused to publish Friedan's results, because they contradicted the conventional assumptions about femininity, Friedan spent five years researching and writing The Feminine Mystique.

In the book, Friedan defines women's unhappiness as "the problem that has no name," then she launches into a detailed exploration of what she believes causes this problem. Through her research— which includes many theories, statistics, and firstperson accounts—Friedan pins the blame on an idealized image of femininity that she calls the feminine mystique. According to Friedan, women have been encouraged to confine themselves to the narrow roles of housewife and mother, forsaking education and career aspirations in the process. Friedan attempts to prove that the feminine mystique denies women the opportunity to develop their own identities, which can ultimately lead to problems for women and their families. Friedan sees the feminine mystique as a failed social experiment that World War II and the Cold War helped to create and which in turn contributed to postwar phenomena like the baby boom and the growth of suburbs. Although Friedan has written several more controversial works, The Feminine Mystique is the book that made her a household name, and it is still her best-known work.