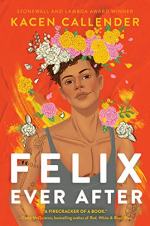 Related Topics
King and the Dragonflies

Felix Ever After Summary & Study Guide

Kacen Callender
This Study Guide consists of approximately 43 pages of chapter summaries, quotes, character analysis, themes, and more - everything you need to sharpen your knowledge of Felix Ever After.

Felix Ever After Summary & Study Guide includes comprehensive information and analysis to help you understand the book. This study guide contains the following sections:

This detailed literature summary also contains Quotes and a Free Quiz on Felix Ever After by Kacen Callender.

The following version of this book was used to create the guide: Callender, Kacen. Felix Ever After. Balzer + Bray, 2020.

The 17-year-old narrator, Felix, attends a summer program at his arts high school In Brooklyn, St. Cats, before starting 12th grade. Felix lives in Harlem with his father, often staying over in his best friend Ezra’s apartment. They cut class often, Ezra feeling unmotivated about his future and Felix so stressed over building a portfolio for college applications he avoids it entirely.

The next day, Felix walks into school at see a gallery of large photos of him before he transitioned, from his Instagram account that he has made private along with his deadname. Felix is horrified. He thinks it may be Declan Keane, Ezra’s ex-boyfriend who used to also be friends with Felix, but has ignored them since he broke up with Ezra in 9th grade.

Felix writes an email to his mother explaining what happened, but does not send it. Felix’s mother left him and his father when Felix was 10. Felix emailed his mother to tell her about his transition, but she never replied. He since drafts emails to her but never sends them. Felix’s father has supported him throughout his transition, paying for testosterone and top surgery, but still does not call him Felix, only “kid” which hurts him.

Felix decides to create a fake Instagram account under “Lucky” to befriend Declan, hoping to uncover a secret about him he can expose as revenge for the gallery. He starts getting messages from an account called “grandequeen69” saying they were behind the gallery, and saying Felix is a girl and will never be a real boy.

Ezra starts seeing a boy in their grade, Austin, which makes Felix jealous. Felix believes he is jealous because he has never kissed anyone or been in love, and wishes he has been. He feels unworthy of love.

Declan and Felix, as Lucky, begin getting very close. He tells Lucky about the gallery, noting his sympathy for Felix and how he is disgusted by the bigotry at his school. Felix realizes Declan was not behind the gallery, but keeps talking to him. Declan tells Lucky he has feelings for him.

Felix continually questions his gender identity, feeling that the identity of trans man does not totally describe him. He attends an LGBT gender identity discussion group, but gets overwhelmed and leaves partway through.

Ezra and Felix ask Leah, who knows how to hack, to check people’s Instagram’s accounts for signs they may be Grandequeen69. Felix becomes closer with Leah.

Felix begins painting self-portraits, which he has never tried before due to dysphoria, at the suggestion of his teacher. He finds them empowering and the best work he has ever done.

Declan tells Lucky that he broke up with Ezra in 9th grade because he could tell Ezra was in love with his best friend, Felix. Felix is shocked.

Felix meets up with Ezra, who has broken up with Austin and is affectionate with Felix. Felix realizes Declan is right. They go to Ezra’s apartment and Ezra kisses Felix. They are overwhelmed by their attraction to each other. Ezra confesses his love for Felix. Felix tells Ezra he does not want to risk losing their friendship, and that he does not want Ezra to love him. They stop speaking.

Felix returns to the LGTB discussion group and does some research, discovering the label “demiboy” perfectly describes how he feels. Feeling confident and overjoyed, he posts a selfie online to share his identity, accidentally posting it on Lucky’s account.

Declan sees the photo and confronts Felix, feeling betrayed that Felix lied and manipulated him to try and get revenge.

Declan approaches Felix a few days later, wanting to see if they can fix their relationship. He invites him to his grandfather’s house in Beacon, where he lives since his father disowned him for coming out. Felix goes and they have a nice time until Declan asks if Felix wants to have sex. Declan realizes he cannot fully forgive Felix, and Felix realizes that his feelings for Declan are not as real as his feelings for Ezra. Felix apologizes for manipulating him, and they leave on okay terms with Declan saying there is a possibility of friendship.

Felix has lunch with Leah when Austin joins them. She asks if he is still going to the Ariana Grande concert, as he is a super fan. Felix realizes Austin is Grandequeen69. Austin admits it, saying he wanted to show to Ezra that Felix was not a “real” boy due to jealousy that Ezra loved Felix. He says that trans men are taking space away from gay men. Felix and Leah tell him how bigoted and entitled he is. They tell the Dean, who kicks Austin out of St. Cats.

Felix tells his father about questioning his identity and asks why he cannot call him Felix. His father apologizes, saying that his old name was the last thing he was struggling to let go of, but that Felix suits him. He says he is proud of Felix for being himself, and he can see how much happier he is now.

Felix goes to the Pride Parade to try and find Ezra. He sees him across the crowd and yells that he loves him and apologizes. They kiss, and begin dating, both overjoyed by their love.

Felix’s self-portraits are chosen to be featured at the End-of-Summer gallery, where only one student is showcased. He gives a speech, speaking about the gallery and how his trans identity is a source of love for him. He has found self-worth and confidence.

More summaries and resources for teaching or studying Felix Ever After.

Felix Ever After from BookRags. (c)2022 BookRags, Inc. All rights reserved.