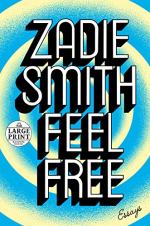 Summary
+Chapters Summary and Analysis
Part I: In the World (“Northwest London Blues” and “Elegy for a Country’s Seasons”)
Part I: In the World (“Fences: A Brexit Diary” and “On Optimism and Despair”)
Part II: In the Audience (“Generation Why?” “The House That Hova Built," and "Brother from Another Mother”)
Part II: In the Audience ("Some Notes on Attunement," "Windows on the Will: Anomalisa" and "Dance Lessons for Writers")
Part III: In the Gallery (“Killing Orson Welles at Midnight,” “Flaming June,” and “‘Crazy They Call Me’”)
Part III: In the Gallery (“Alte Frau by Balthasar Denner,” "Mark Bradford's Niagara," and "A Bird of Few Words: Narrative Mysteries in the Paintings of Lynette Yiadom-Boakye")
Part III: In the Gallery ("The Tattered Ruins of the Map: On Sarah Sze’s Centrifuge" and "Getting In and Out")
Part IV: On the Bookshelf ("Crash by J.G. Ballard," "The Buddha of Suburbia by Hanif Kureishi," and "Notes on NW")
Part IV: On the Bookshelf ("The Harper’s Columns," part 1)
Part IV: On the Bookshelf ("The Harper’s Columns," part 2 and "The I Who Is Not Me")
Part V: Feel Free ("Life-Writing," "The Bathroom," "Man Versus Corpse")
Part V: Feel Free ("Meet Justin Bieber!", "Love in the Gardens")
Part V: Feel Free ("The Shadow of Ideas," "Find Your Beach," "Joy")
Important People
Objects/Places
Themes
Styles
Quotes
Topics for Discussion
Order our Feel Free Study Guide

Zadie Smith
This Study Guide consists of approximately 53 pages of chapter summaries, quotes, character analysis, themes, and more - everything you need to sharpen your knowledge of Feel Free.

The following version of this book was used to create this study guide: Smith, Zadie. Feel Free. Penguin Press, 2018.

Feel Free, a collection of essays and writings published by Zadie Smith in recent years, is divided into five parts: “In the World,” “In the Audience,” “In the Gallery,” “On the Bookshelf,” and “Feel Free.” “In the World” primarily tackles recent political questions, including the U.K.’s vote to leave the European Union, the planned demolition of libraries in London, rising xenophobia and hostility in British culture, climate change and multiculturalism.

“In the Audience” places Smith in the role of a critic and spectator, and shows her engaging with popular culture forms, such as television, film, music and comedy. These essays include a profile of Jay-Z, who Smith likens to an “elder statesman” (72), and a profile of Keegan Michael-Key and Jordan Peele, the creators of the sketch comedy show Key & Peele, as well as a more personal essay about Smith’s evolving relationship to Joni Mitchell’s music.

“In the Gallery” showcases Smith’s relationship to visual art. In this section, Smith discusses the first purchase of art she ever made, muses on the importance and meaning of camp, and writes about Balthasar Denner’s painting, "Alte Frau." “In the Gallery” concludes with Smith’s analysis of Jordan Peele’s summer hit film, “Get Out,” which she juxtaposes with Dana Schultz’s controversial painting of Emmett Till.

In “On the Bookshelf,” the longest section of Feel Free, Smith reviews and reflects on a number of books. Some of these books, such as "The Buddha of Suburbia" by Hanif Kureishi, have been inspirational to her and her writing. A number of other books are ones that she reviewed for Harper’s Magazine. A handful of the pieces in “On the Bookshelf” also reflect on her own writing, such as “Notes on NW” about the literary influences behind "NW" and “The I Who Is Not Me,” about Smith’s growing acceptance of the first person tense.

The final section, “Feel Free,” shifts the conversation towards larger and more scattered questions about personhood, joy versus pleasure, and gardens. The section begins with an analysis of the objectification of Justin Bieber and ends with Smith’s belief that joy, unlike pleasure, is a combination of “terror, pain and delight” (429). The collection of essays ends with Smith’s surprise that, unlike animals, humans tend to choose the more complex feeling of joy over the simpler feeling of pleasure.

More summaries and resources for teaching or studying Feel Free.