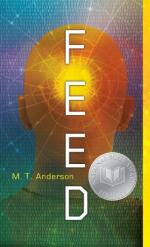 Matthew Tobin Anderson
This Study Guide consists of approximately 36 pages of chapter summaries, quotes, character analysis, themes, and more - everything you need to sharpen your knowledge of Feed.

This detailed literature summary also contains Topics for Discussion and a Free Quiz on Feed by Matthew Tobin Anderson.

In Feed by M.T. Anderson, Titus is a teenager with a feed, or transmitter implanted in his brain. He and his friends live their lives by suggestions, such as advertisements, from the feed. Titus' love interest Violet does not agree with the feed, especially after a traumatic experience. Titus goes on a journey to discover what the feed really means.

Titus is an average teenager, except he has a feed, or transmitter implanted in his brain. He lives in the United States somewhere at least one hundred years or so in the future. Titus is a typical, immature teenager who is bored by everything. The feed constantly streams technology and media, i.e., feed shows, radio and advertisements, in his head. Titus and his friends live by the feed. Anything they desire, the feed reads and gives them constant suggestions to buy.

They go back home to the United States. Titus and Violet deepen their relationship and begin to fall in love. As Titus is getting to know her, he discovers she comes from a poor family, whereas his family is wealthy. She is also a traditionalist, or someone who can read, write and knows how to do other normal, human things. The feed does not dominate her life. She does not fit in with Titus' friends, who live and die by the feed. As Titus becomes closer to Violet, he pulls away from his friends and sees their immaturity. Violet is extremely intelligent and questions the feed. She thinks it makes the human race stupid and simple. She tries to fight the feed by conducting an experiment to confuse the feed.

Due to the hack, Violet is dying. She continually becomes paralyzed and knows she will die soon. This devastates Titus, since they are falling in love. At a party, she goes into convulsions and completely malfunctions. As days go by, different areas of her body freeze. Titus cannot handle this intense situation and they break up. He moves onto another girl and goes back to being immature and silly with his friends. When she is completely brain dead, he goes to see her and reads her facts, stories and political news. He resists the feed as he tells her these things. He says their story is one of two teenagers in love who learn to resist the feed.

More summaries and resources for teaching or studying Feed.