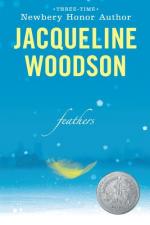 Jacqueline Woodson
This Study Guide consists of approximately 33 pages of chapter summaries, quotes, character analysis, themes, and more - everything you need to sharpen your knowledge of Feathers.

This detailed literature summary also contains Topics for Discussion and a Free Quiz on Feathers by Jacqueline Woodson.

A new kid is enrolled in Frannie's sixth grade class. The children at Price School are all African Americans. Although there is some question about his true identity, the new boy looks white; in fact, he is extremely pale. The kids in the class cannot understand why a white boy would choose to come to their school—all the white kids live and go to school across the highway. The children all have different reactions to the new kid. Frannie, who is the narrator of the story, is intrigued by the new kid and has empathy for him. Frannie's older brother, Sean, is deaf. She associates the new kid with her brother because they are both different and kids have strong reactions to both of them—some not so nice. Some of the children think the new kid looks like Jesus. He seems to be white and he has long hair just like Jesus. The kids dub him Jesus Boy. The kid likes his new name.

Trevor, who is bi-racial and the class bully, immediately resents the new kid. He feels threatened by him, fearing that the presence of the white boy will bring the subject of race to the surface—a subject that he vigorously avoids. Trevor tells the new kid that he doesn't belong at Price School because he's white. Jesus Boy holds his ground and declares that he is not white, a statement which serves to confuse everyone.

Frannie's best friend, Samantha, who is very religious and the daughter of a Baptist preacher, begins to hope that Jesus Boy is in fact the real Jesus. She is elated with the thought that Jesus would choose Price School for his return to earth. She thinks all the signs are pointing to the boy being Jesus. Jesus is really needed because there is a war going on and people are starving. The practical Frannie points out to her friend that there are always wars and always starvation. Samantha is convinced more than ever that the boy is Jesus because another classmate, RayRay, has become a much better person since Jesus Boy arrived.

Frannie has problems at home. Her mother, who has lost an infant daughter and two more babies in miscarriages, is pregnant again. Frannie and her brother Sean are concerned that their mother may lose this baby and be depressed again like she was in the past. Frannie is protective of Sean and wants him to stay in the deaf world where he is accepted. But Sean wants to reach out and be part of all worlds. Frannie transfers her protectiveness to Jesus Boy. She feels empathy for him because she remembers how she felt when she was the new kid. Frannie is the first to befriend Jesus Boy. When Jesus Boy's behavior plainly shows that he is human and not Jesus, Samantha is disappointed. Frannie's big heart understands Samantha's disappointment and comforts her.

Frannie's mother's condition improves and the baby seems to be thriving. The teacher, recognizing that Jesus Boy is not being accepted by some of the kids, illustrates how one can have many similarities with people who seem to be different. Frannie learns to hold on to the good memories in life and feel comforted by hope - because hope is all around.

More summaries and resources for teaching or studying Feathers.