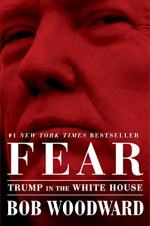 Bob Woodward
This Study Guide consists of approximately 51 pages of chapter summaries, quotes, character analysis, themes, and more - everything you need to sharpen your knowledge of Fear.

This book covers the Trump White House in Washington, D.C., from its first days to two years into the presidency. Woodward reproduces a series of meetings and conversations among Trump and his closest advisors. The book talks about meetings that occurred mostly in the Oval Office, though it also covers meetings in the Pentagon nearby.

Bedminster, New Jersey, was the site of Trump's golf course. This is where Trump met with Bannon during the campaign and where he later invited Mattis to speak before he took office. He often took time away from the White House to go to Bedminister to play golf, which was his only hobby aside from watching cable news.

Trump was accused of having dealings with the Russians, including an incident in which, in 2013, he paid Russian prostitutes to urinate on the bed where Barack and Michelle...