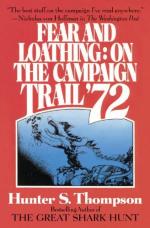 Fear and Loathing: On the Campaign Trail '72 Summary & Study Guide

Hunter S. Thompson
This Study Guide consists of approximately 33 pages of chapter summaries, quotes, character analysis, themes, and more - everything you need to sharpen your knowledge of Fear and Loathing.

Fear and Loathing: On the Campaign Trail '72 Summary & Study Guide includes comprehensive information and analysis to help you understand the book. This study guide contains the following sections:

This detailed literature summary also contains Topics for Discussion and a Free Quiz on Fear and Loathing: On the Campaign Trail '72 by Hunter S. Thompson.

This is an account written by a journalist. Hunter S. Thompson managed to make a name for himself as a successful journalist despite what could have been an almost crippling handicap - his intimacy with "counter culture." Instead, he managed to make the unruly aspects of his nature and behavior an asset within the field of journalism. This man made himself famous by writing a book based on his experiences with one of USA's most prevalent criminal organizations - the Hell's Angels. The man is a journalist: he could not spend too much time with them. At the same time, he somehow managed to keep up with the others. He made himself famous with Fear & Loathing in Las Vegas and through writing for Rolling Stone magazine. Many "sins" which might have gone unforgiven were rapidly excused if only because, well, "It's rock-n-roll."

Hunter introduces himself to readers as a bit of a misfit Hippie figure. He has imbibed the drug culture and has found himself caught between actual gentlemen and the rougher working class people. This comes in early in the book when he describes Washington D.C.. On his way there he picks up a pair of men who were stranded. While befriending them he discovers that not only would they like him to get intoxicated with them, but they begin to hack away at government officials and rail against the city of Washington D.C. and everyone in it. Then, when Hunter does get to D. C., he has a bizarre impression based too much in the truth that every adult in the city is either involved with the government or is a crook. He describes the condition of the go-betweens as rife with fear and trembling. This is almost thematic of conditions in American culture's lower socio-economic classes.

Luckily, Hunter S. Thompson is a doberman pincher type of man. It may not be fair to judge a man by his dogs, but everyone knows there is something about this sleek sensitive sort of guard dog. Vicious, but still able to claim ribbons at dog shows for their beauty, Thompson brings an extra doberman with him to D.C.. The book is a nonfiction account of an American political campaign of the early 1970s. He begins by supporting an underdog candidate who does very well in the end. Readers will delight or snicker when they read this highly subjective, openly-biased account of the people and events surrounding the campaign. The truth is, that's just the sort of information the author and target audience want.

More summaries and resources for teaching or studying Fear and Loathing: On the Campaign Trail '72.

Fear and Loathing: On the Campaign Trail '72 from BookRags. (c)2022 BookRags, Inc. All rights reserved.