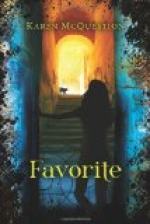 Karen McQuestion
This Study Guide consists of approximately 41 pages of chapter summaries, quotes, character analysis, themes, and more - everything you need to sharpen your knowledge of Favorite.

"Favorite" is a 2010 mystery/suspense novel by Young Adult author Karen McQuestion. The novel is narrated by Angie Favorite, a 16-year-old who is injured after being attacked by a stranger named Scott Bittner. After Bittner hangs himself while in jail, Angie accepts an invitation from the man's mother to visit her so that Mrs. Bittner can apologize for her son's actions, and soon finds herself forced to stay at the Bittner mansion after spraining her ankle. Angie quickly begins uncovering clues which lead her to believe that the attack on her and her mother's mysterious disappearance five years before are somehow connected.

One day in early June a man grabs Angie Favorite's arm in a parking lot and tells her that there is something she needs to see. Angie pulls away and runs but the man catches her and says there is something he needs to show her. Angie breaks free but falls, hits her head on a rock, and loses consciousness. She wakes up in the hospital; she has multiple bruises and a hairline skull fracture, but will make a full recovery. Her grandmother tells her that two girls saw her being attacked and called 911, and her attacker was arrested before he could do her any more harm.

Angie is released from the hospital, and goes home to where she lives with her grandmother and her older brother Jason. Five years earlier on Angie's eleventh birthday her mother, Laura Favorite, disappeared without a trace. Several months later Angie's father - a rock musician - was sent to prison on a false drug charge and Angie's grandmother was awarded custody of her and Jason. Angie's grandmother is leaving on a Caribbean cruise the day after Angie leaves the hospital and reluctantly allows her father - who she considers very irresponsible - to stay with Angie and Jason while she is gone.

Angie has a difficult time dealing with what has happened to her; she spends her first few days home sleeping and watching television, and never leaves the apartment. She receives a letter from Lillian Bittner, the mother of Scott Bittner - the mentally and emotionally disturbed man who attacked her - telling her that her son isn't really a bad person and asking Angie to call her. When she calls the number in the letter she is told that Mrs. Bittner is in shock; her son Scott has just hanged himself in his jail cell. Mrs. Bittner speaks with Angie's father a few days later and invites Angie, her brother, and her father to her home so that she can apologize to Angie personally. Angie does not want to go, but eventually gives in and agrees.

The Bittner house is an enormous mansion on a lakefront property that looks like a castle, complete with turrets and towers. Angie is uncomfortable the entire time she is there, and leaves after a short visit. A few days later her father leaves for the West Coast for three days, and Mrs. Bittner calls and invites Angie and Jason to dinner, saying that she might be able to arrange full college scholarships for both of them. Jason begs Angie to go, and she reluctantly agrees. Hank - who has worked for the Bittner's for 30 years - picks them up and brings them to the mansion, where Angie meets Mrs. Bittner's grandson, Mike. After dinner Mike takes Angie for a boat ride on the lake. He tells her that his Uncle Scott had been obsessed with Angie's mother before she disappeared, and kept a scrapbook about her after she went missing. When they return to the dock Angie twists her ankle and after Jason lets it slip that their father is not at home, Mrs. Bittner insists that Angie and Jason stay with her at the mansion. Hank takes Jason home so he can get them both some clothes, and he brings Angie's cat Misty back with him to apologize for getting them stuck there.

The next day after Jason goes to work, Angie overhears part of a conversation between Hank and his wife Trudy - the cook - in which Hank says they could both go to prison and Trudy says that if they are patient a little longer they will get a huge payoff. Later Mike comes to the mansion and shows Angie a family album. One of the pictures shows a young Mrs. Bittner with three children; Mike's father, his Uncle Scott, and their sister Laura, who died when she was five. After Mike leaves, Angie asks Mrs. Bittner about her son Scott's obsession with her mother and the older woman says that her son was a gentle, kind man who loved her mother and would never have hurt her. She then shows Angie Scott's scrapbook, which is filled with photographs and drawings of Angie's mother. Angie suddenly feels ill and returns to her bedroom. Jason returns from work and tells Angie that he reached their father and that he would be back to get them in the morning. They join Mrs. Bittner for dinner where Jason drinks several glasses of champagne but Angie abstains, and then return to their rooms and go to bed.

Angie is awakened by the sound of her cat Misty wailing outside her room. She is unable to wake Jason and follows the sound of Misty's wailing up to the third floor, and then up another set of steps to one of the towers. Misty leads her to a door, and a moment later Angie hears a woman's voice. The woman says that she has been locked in and that her name is Laura Favorite. Angie gets her mother out of the room and then tries to get them both out of the house, but Mrs. Bittner traps them in the elevator on the second floor. Laura tells Angie that it was Mrs. Bittner who held her captive for the last five years and tried to convince her that she was her own dead daughter Laura, and that Scott Bittner had tried to help her escape by taking a note she wrote to Angie. Angie realizes that Scott had not been attacking her at all, but had been trying to take her to her mother and that she had misunderstood.

Angie is able to get out of the elevator through a hatch in the ceiling, and calls the police. She hears her mother cry out and rushes back to the elevator to help her. Mrs. Bittner is standing in front of the elevator doors and points a gun at Angie. Laura hits Mrs. Bittner with a crutch as she is firing and knocks her out, and the bullet misses Angie. The police arrive and arrest Mrs. Bittner as well as Hank and Trudy, who have helped keep Laura captive. The family is reunited, and a month later Angie's parents renew their wedding vows. For the first time in five years Angie believes that things will be alright now that her family is finally together again.

More summaries and resources for teaching or studying Favorite.

Favorite from Gale. ©2005-2006 Thomson Gale, a part of the Thomson Corporation. All rights reserved.