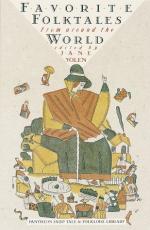 +Chapters Summary and Analysis
Telling Tales
The Very Young and the Very Old
True Loves and False
Tricksters, Rogues, and Cheats
The Fool: Numbskulls and Noodleheads
Heros: Likely and Unlikely
Wonder Talkes, Tall Tales, and Brag
Shape Shifters
Not Quite Human
Folling the Devil
The Getting of Wisdom
Ghosts and Revenants
Death and the World's End
Free Quiz
Characters
Objects/Places
Themes
Style
Quotes
Topics for Discussion
Order our Favorite Folktales from Around the World Study Guide

Jane Yolen
This Study Guide consists of approximately 37 pages of chapter summaries, quotes, character analysis, themes, and more - everything you need to sharpen your knowledge of Favorite Folktales from Around the World.

The Very Young and the Very Old Summary

Glooscap and the Baby is an American Indian story about a good named Glooscap who conquered many great enemies and was sad because there were none left for him to fight. He is told about a Wasis, who has never been defeated. Glooscap tries to best Wasis, but Wasis is only a baby and responds to nothing that Glooscap does and so Glooscap leaves defeated.

The Brewery of Eggshells is an Irish story of a woman who has her baby replaced with an Imp. The woman is told to brew eggshells to see if the child truly is not hers. When she does this the infant begins to speak to her and just as she is about to kill the imp it vanishes and her own child is replaced.

More summaries and resources for teaching or studying Favorite Folktales from Around the World.

Favorite Folktales from Around the World from BookRags. (c)2021 BookRags, Inc. All rights reserved.