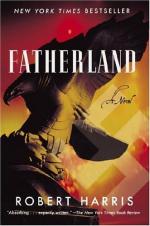 Robert Harris (novelist)
This Study Guide consists of approximately 31 pages of chapter summaries, quotes, character analysis, themes, and more - everything you need to sharpen your knowledge of Fatherland.

This detailed literature summary also contains Topics for Discussion and a Free Quiz on Fatherland by Robert Harris (novelist).

Fatherland is the alternate history story of the Nazi German rule over Europe as if Germany had won World War II. The story unfolds to uncover the murders of high-ranking German officials on the eve of Adolf Hitler's seventy-fifth birthday in 1964.

The story begins with German Kripo criminal detective Xavier March assigned to work a case involving a dead body found in the Havel River in Berlin. When the body does not fit the descriptions of any reported missing persons, March fingerprints the corpse and discovers that the man had been a high ranking German official named Josef Buhler. March's investigation leads him to the staged suicide scene of another high ranking German official, Wilhelm Stuckart, and his mistress.

March's investigation is complicated by the appearance of Charlie Maguire, an American reporter who had been pulled into the case by a phone call from Stuckart a few days prior. March's investigation at first leads to a theft ring of Nazi officials who stole priceless art during World War II and then sold it in other countries to amass personal fortunes. March eventually learns that the art thefts are a ruse developed by the Gestapo to divert March from finding the real reason for the deaths of Buhler and Stuckart.

March receives the feigned support of the head of the SS police to continue his investigation independent of the official Gestapo investigation into the case and soon learns that one more man, Martin Luther, is connected to Buhler and Stuckart. Luther is still alive and his attempts to contact Charlie in hopes of defecting to America end in his public murder.

Eventually March and Charlie discover the true reason for the Nazi cover up is that Buhler, Stuckart and Luther have information about the Wannsee Conference which was held in January of 1942 to determine the final solution of how to exterminate the European Jews according to Adolf Hitler's wishes. March is able to find the hidden documents related to the Holocaust and realizes that he must get the information released to the world through Charlie's journalism avenues.

March and Charlie devise a plan to escape into Zurich and then to America to tell the world about the Nazi atrocities. March is arrested, tortured and killed as a result of the betrayal of his best friend and partner but Charlie escapes with the incriminating evidence and documents in hand.

More summaries and resources for teaching or studying Fatherland.