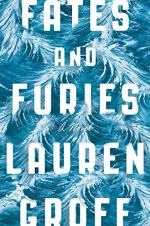 Illegal drugs are taken by Lotto, Chollie, Gwennie, and Michael early on in the novel. The illegal drugs are first introduced to the group by Michael. Lotto, Chollie, Gwennie, and Michael get heavily into drugs to such an extent that it becomes scary to Lotto. Lotto cleaves to marriage as a way to cut off his past, including drugs.

Play scripts are written by Lotto from his early thirties through the rest of his life. The scripts are...