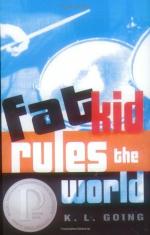 KL Going
This Study Guide consists of approximately 32 pages of chapter summaries, quotes, character analysis, themes, and more - everything you need to sharpen your knowledge of Fat Kid Rules the World.

"Fat Kid Rules the World" by K. L. Going tells the story of a 17-year-old boy named Troy who is pushing 300 pounds. He has serious issues with his image and the book begins with Troy standing on the edge of the subway platform, contemplating suicide. He is distracted by an emaciated young man who is a popular, talented musician named Curt. They form a friendship that transforms each of them in unique ways.

Curt decides that Troy should be the drummer in his new band, Rage/Tectonic. This sounds great to Troy until he really focuses on the fact that he hasn't played drums since junior high school, and he didn't play that much then. He likes the idea of being on stage, but the reality of it terrifies him. Curt tells him not to worry about it and arranges a gig five weeks in the future. He also arranges for Troy received some drum lessons.

They meet together to practice with Troy cutting classes. He gains new respect from some of the students in the school due to his Curt connection. As he gets to know Curt, he realizes that his friend is addicted to prescription drugs. Curt also doesn't really have a place to live because he can't stand his stepfather. Curt is always sleeping in odd places, and he is always hungry, eating food obsessively when he gets his hands on it.

Curt make a deal with a friend so Troy can have his first drum lesson with Ollie, but Troy panics. He feels like a complete failure. His brother scoffs at him, but his father shows support. He warns his son to be careful with Curt because Curt displays all the symptoms of a junkie. However, he seems to understand that Curt is the key to Troy's healing. Troy turned to food for comfort after his mother died when he was younger, and he hit a point where he didn't go out much or have any friends. Now, with Curt in the picture, Troy is inspired to go out and try new things again.

Even after he has decided not to become a drummer for Curt, Troy goes to a show after Curt invites him. Troy gets a firsthand look at what happens backstage. When the show begins, he is taken up by the energy and is enthralled by the energy and raw power of the music. He wants to become part of it.

Over the next few weeks, Troy works very hard at his drumming. When it comes time for his first day playing in a gig, he is so nervous that he throws up on stage. Horrified, he decides to quit and hibernate in his home. He turns to food for comfort. Days later, Ollie calls and asks him to get in touch with Curt because Curt feels as if Troy has abandoned him.

Curt isn't doing well and when he and Troy are talking together, he collapses. Troy takes him to the hospital where they find out that Curt has a bad case of pneumonia. The hospital is a haven for Curt, who has no reason to leave since he has nowhere to go. Troy sacrifices his future with the band to show Curt was a real friend is. As the story finishes, the two are on stage, both transformed and ready to take on the world through music.

More summaries and resources for teaching or studying Fat Kid Rules the World.