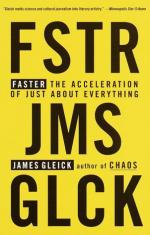 Faster: The Acceleration of Just About Everything Summary & Study Guide

Faster: The Acceleration of Just About Everything Summary & Study Guide Description

Faster: The Acceleration of Just About Everything Summary & Study Guide includes comprehensive information and analysis to help you understand the book. This study guide contains the following sections:

This detailed literature summary also contains Topics for Discussion on Faster: The Acceleration of Just About Everything by James Gleick.

"Faster: The Acceleration of Just About Everything" by James Gleick begins with this quote, "You are in the Directorate of Time. Naturally, you are running late." (Chapter 1, p. 3).

Author James Gleick introduces the Directorate of Time, Gernot Winkler, and the existence of the plethora of atomic clocks based atop a hill near the Potomac River. The clocks are exquisitely precise and to ensure their precision. Each clock is synchronized and compared to many others. Gleick talks about a time when people relied on the revolving earth to tell time and were happy with the result. That is no longer true.

"Through most of history, time was fixed by astronomical reference points - the Earth spins once, call it a day. No more. The absolute reference as shifted from the stars to the atomic beams in their vaults. Particles are steadier than planets. Never mind the uncertainty principle it is the heavens that cannot be relied on." (Chapter 1, p. 4)>

Author James Gleick presents material in a straightforward manner. Gleick manages, in his humorous and plain language, to describe the scientific principals of time without overwhelming the reader. The author points out the ridiculousness of some of the things people do to save time or how it is wasted.

One of the main themes in the book is acceleration. Valuing or overvaluing time causes people to want to do more things and to do them faster. Multitasking is a way of life for most people. Many eat while watching TV, talk to the kids, or listen to audio books while driving or attempt to learn a foreign language during sleeping hours. In fact, the more people do, the more people want to do. Unfortunately, this often causes stress because people begin to compare themselves to others and believe that they could be doing more and more more.

Gleick discuss various types of accelerants. The knowledge and understanding the concept of time works as an accelerant. There are others, namely amphetamines and caffeine. Methamphetamine is a popular drug and is among several that have coined the use of the term "speed." Speed has become a metaphor within a metaphor and people automatically relate the concept to something that's "on speed." "Rush" is also a metaphor and is so popular that it is used in ad campaigns for caffeinated drinks.

With acceleration comes a loss of leisure time, appreciation for things that take concentration such as classical music.

Various topics are included in the book including the birth of the Industrial Revolution and the advent of the "time is money" philosophy. Modern conveniences, fast food, and multitasking are discussed at length and how the activities of the population have changed dramatically in just one generation. People tend to want to do more and to do it faster than ever before. However, there is a price to pay for all of this speed - primarily, a loss of leisure time and enjoyment as well as the physical and psychological ailments that come along with living at a high rate of speed.

Faster: The Acceleration of Just About Everything from BookRags. (c)2022 BookRags, Inc. All rights reserved.