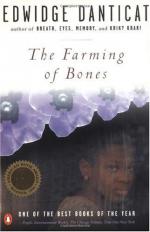 The Farming of Bones Historical Context

In an essay in Kreyol, describing a 1995 visit to the river, Danticat writes, "Between Haiti and the Dominican Republic flows a river filled with ghosts." The Massacre River was named for a seventeethcentury bloodbath, but as Danticat makes clear, it has continued to live up to its name. The river divides the small Caribbean island of Hispaniola into the countries of Haiti and the Dominican Republic. Because the countries are so close, their fates have historically been intertwined. The Farming of Bones begins in the Republic, during the regime of General Rafael Trujillo.

From 1930 to 1961, the Dominican Republic was ruled by General Rafael Leonidas Trujillo, whose ascension to power was inadvertently aided by American efforts to bolster stability in the Caribbean. American leaders were interested in the Caribbean because it was a gateway to the Panama Canal, central to U.S. shipping and...