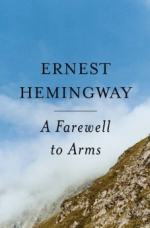 A Farewell to Arms Summary & Study Guide includes comprehensive information and analysis to help you understand the book. This study guide contains the following sections:

This detailed literature summary also contains Topics for Discussion on A Farewell to Arms by Ernest Hemingway.

A Farewell To Arms was first published in 1929 and is widely considered to be one of the most realistic novels dealing with World War I. Ernest Hemingway wrote the novel as a semi-autobiographical response to his own experiences working as a volunteer ambulance driver for the Italian Army. Hemingway’s reputation for being a straightforward, non-flowery writer of contemporary literature was secured with the publication of A Farewell To Arms, and it is regarded as a classic in 20th century American Literature. Parts of the novel were censored as indecent and although the language is not considered nearly as offensive in modern terms, the censored words are still absent from the most recent editions of the book.

The book follows the journeys of Frederic Henry, beginning in the summer of 1916 near the front of the Italian resistance in World War I. Henry is a volunteer ambulance driver and also an American, a fact that gets him into trouble throughout the novel. From the outset, readers are aware that Henry is well-liked among his peers and has high personal standards when it comes to working hard and protecting the other men in his outfit. He is injured at the battlefront shortly after seeking out food for his colleagues, and though others try to praise him for his bravery, Henry downplays his courage by remarking that he was injured while “eating cheese.” Henry does not boast or use his position as a lieutenant to seek out favors or advance his own agenda.

Henry meets Catherine Barkley, a British nurse, while stationed in an Italian village called Gorzia. The two immediately fall for each other and their relationship deepens when Henry is injured and transferred to an American hospital in Milan. Catherine requests a transfer there and nurses him back to health. The two keep their relationship a secret so that Catherine can work the night shift and spend the nights with Henry. They discuss marriage, but Catherine insists that she would rather wait rather than risk being separated from Henry. As Henry begins to recover, Catherine discovers that she is pregnant. Henry must return to duty and the two determine that they will be back together again soon.

After a few days back at the front, Henry joins the rest of the military units in a retreat back from the front. The slow, tedious journey proves dangerous for Henry, who must plunge into a rushing river to escape being shot by the Italian army who are suspicious of his American ties. He finds his way back to Milan in secret, and then onto Stresa to track down Catherine. They reunite and must flee to avoid Henry’s arrest by Italian authorities. They travel by rowboat to Switzerland where they spend the winter in safety as Catherine gets closer to having the baby. As Catherine goes into labor it is clear that she is having trouble. She can tell that she is in danger and tells Henry that she meant to write him a letter in case anything bad should happen during the delivery but never got around to writing it. The doctor tells Henry that a Caesarean operation will be necessary to get the baby out and protect Catherine. The baby is still-born and Catherine dies hours later after hemorrhaging several times. Henry walks back to the hotel alone in the rain.

A Farewell to Arms from BookRags. (c)2022 BookRags, Inc. All rights reserved.