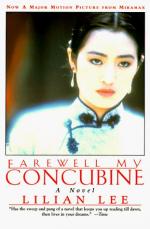 Additional Resources for Farewell My Concubine by Lilian Lee

Lilian Lee
This Study Guide consists of approximately 37 pages of chapter summaries, quotes, character analysis, themes, and more - everything you need to sharpen your knowledge of Farewell My Concubine.

This invaluable resource on the history of Peking includes a number of photos, illustrations, maps, and charts that increase the reader's understanding of the ancient city. In addition, the book includes a section on Peking opera.

This coffee-table book explores the colorful world of Chinese opera in more than 100 full-page photographs by Gudnason. The photos, many of which are close-up portraits, offer a thorough examination of the types of costumes and makeup performers wear in Peking, Cantonese, and Yue opera. The book includes an introductory essay by Gong Lithe actress who played Juxian in the film version of Farewell My Concubinewhich explains the various types of characters, costumes, and makeup involved in Chinese opera.

More summaries and resources for teaching or studying Farewell My Concubine.

Farewell My Concubine from Gale. ©2005-2006 Thomson Gale, a part of the Thomson Corporation. All rights reserved.