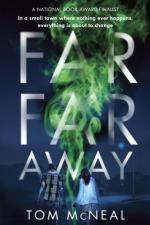 Tom McNeal
This Study Guide consists of approximately 55 pages of chapter summaries, quotes, character analysis, themes, and more - everything you need to sharpen your knowledge of Far Far Away.

This detailed literature summary also contains Quotes and a Free Quiz on Far Far Away by Tom McNeal.

Far Far Away is a fairy-tale in the real world, written to place the horrific events and classic fairy-tale justice into the modern world. The town is in slight turmoil, as there have been steady disappearances of children with little to no explanation, and the sheriff declares them all runaways because he simply does not have the resources to pursue the case. However, morale is high as the green smoke signifies the arrival of a fresh batch of delicious Prince Cakes.

The protagonist is Jeremy Johnson, a teenager who has the ability to speak with those on the Zwischenraum, a spirit plane between the living and the afterlife. The narrator is one of these spirits, the ghost of one of the Brother's Grimm, Jacob. He is sent to protect Jeremy from the Finder of Occasions, a villain who does not resemble other villains. The two quickly bond, as they relate to their relative lack of friends in life. Jacob often feeds Jeremy quips and other sayings in various languages, which only helps label him as a tad strange in his community. Jeremy first has to deal with his own issues, however, as his mother had left him and his father and is now dead, and his father, Harold, is unable to pull himself off the couch, let alone out of the house. As a result of his father's lack of work their house and bookstore, the Two-Book Bookstore that was gifted to Jeremy in his grandfather's will, are subject to foreclosure and there is no salvation in sight. It is in this environment where Jacob enters, with his plan of protecting Jeremy centering around Jeremy's academic success and his leaving the town to go to college. Of course, nothing in this plan will help Jeremy pay off his substantial debt, so he instead turns to a budding relationship with Ginger to brainstorm for him.

The two begin their relationship in a rather conspicuous way, first with Ginger entering under Jeremy's enchantment as a result of the Prince Cakes (a town myth) as well as with a prank on Sten Blix, the baker that goes horribly wrong as the sheriff is involved. Sten Blix forgives Jeremy by pulling back his charges, but Jeremy suffers from a worse punishment, public shunning, as a result of the spreading of information by Deputy McRaven, who is in love with Ginger. This shunning only worsens when Ginger accidentally falls asleep in Jeremy's bed after attempting to console him. Shortly after this the baker offers them the opportunity to do some odd jobs, which comes as a shock and a great help to Jeremy who had lost all of his previous jobs as a result of the two incidents. Ginger feels especially bad about this and attempts to find a solution to Jeremy's money problems by signing him up to audition for Uncommon Knowledge for his languages, a show that is well liked by his town and loved by his father. Jeremy first has an ethical discussion with Jacob about using his information as his own, and he reluctantly accepts that his gift might be his ability to hear Jacob, and so it is not really cheating. Conk, a local lunkhead, drives them to the audition, where Jeremy does not do well at the languages, he is too slow. Jacob makes him state that he has skill in the Grimm Stories, which goes significantly better as the casting staff is very impressed.

When they return from this audition Jeremy is shocked to see his father dressed and singing with Jenny Applegarth, a widowed woman of the town. His father seems very happy. He even leaves the house one day and gets a job as a bus boy, all due to Jenny. Jeremy receives a visit from the mayor who offers to loan him the money to pay off his bookstore leaving it as collateral after a period of six weeks. This is necessary as the bank is going to take it at the end of the week, and so Jeremy accepts, but this makes the TV show even more of a necessity. Fortunately, he makes it onto the show, much to his surprise and Jacob's glee. Harold is also very proud and excited. The show goes very well for Jeremy at first as he earns $64,000 on the weight of Jacob's knowledge of his own writings and books until Jacob's pride and confidence gets ahead of him and they fail to answer a Disney question and lose all of the money. Jeremy is devastated, and Jacob attempts to bond with him and raise his spirits by finally sharing some of his personal history, his relationship with his nephew who had died at a very young age. This death took a large toll on Jacob, larger than he is willing to admit to Jeremy.

The next day Ginger and Jeremy go to work for the baker another time, this time construction related work in the forest at his cabin. Jacob, of course, tags along but doesn't see anything suspicious about this event. The two children chop some wood, swim and eat lunch, where they are drugged and taken prisoner by the baker as Jacob realizes that Sten Blix is the Finder of Occasions but can do nothing but watch him drive away with Ginger and Jeremy in his van. Using letters that Sten had the children write as part of an exercise he is able to get their parents to believe that they simply ran away, while he takes them into his bakery storeroom, through a hidden door in the wall and into a dungeon with three cells, one of which already occupied by Frank Bailey, his former assistant who was supposed to have gone to California for a cooking school. Frank fills them in on the workings of this dungeon, and Jacob tells Jeremy exactly where they are, hoping that this information will prove useful. Sten visits them from time to time, telling them his backstory, how he had ran away and was adopted by a baker and his wife, who showed him the Prince cakes, which are in memory of someone who had died in the village. Over the course of their imprisonment the children are told fairy-tales and are subjected to starvation, darkness and strange frightening noises by Sten Blix as well as writing additional letters to console their family members and keep them off of the baker's trail. Jeremy tries multiple ploys to escape, startling Sten with his knowledge of their location and attempting to write an acrostic letter, but fails. Eventually Sten poisons them, and although Jacob warns them of the danger, their hunger is too great to not eat it.

Jacob leaves the children, and in desperation attempts to get someone - anyone - to hear him but fails. He then hears the voice of his nephew who tells him to sing, and he is able to sing to Jenny Applegarth and get her to understand what is going on. She gets the entire town to follow her to the bakery, where Jacob sings her the information to get into the dungeon in time to save the children. The sheriff and Jacob arrive at the baker's house in time to watch him walk into his own oven and die. Jacob attempts to get information from the ghostly Sten but cannot. The story concludes with everyone happy and well, and Jeremy's 'I love you' to Jacob sends him off into the afterlife.

More summaries and resources for teaching or studying Far Far Away.