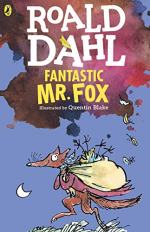 Related Topics
Ah, Sweet Mystery of Life: The Country Stories of Roald Dahl
Charlie and the Chocolate Factory
Collected Stories
James and the Giant Peach
Lamb to the Slaughter
Matilda
My Uncle Oswald
Roald Dahl
Tales of the Unexpected (book)
The Best of Roald Dahl
The BFG
Danny the Champion of the World
Charlie and the Great Glass Elevator
George's Marvelous Medicine
The Twits
Skin (Roald Dahl)
Beware of Dog
The Way Up to Heaven
The Umbrella Man
Kiss Kiss

Roald Dahl
This Study Guide consists of approximately 26 pages of chapter summaries, quotes, character analysis, themes, and more - everything you need to sharpen your knowledge of Fantastic Mr. Fox.

“Fantastic Mr. Fox” is a children’s novel written by Roald Dahl and illustrated by Quentin Blake in which the fantastic Mr. Fox attempts to outwit three mean farmers in their attempts to kill him and his family. When the novel begins, Mr. Fox, Mrs. Fox, and their four Small Foxes live in a hole under a tree on a hill overlooking the valley. In the valley are three large farms owned and overseen by three farmers, Boggis, Bunce, and Bean. They are very rich, and are very mean. Each night, Mr. Fox sneaks down to their farms to steal chickens, ducks, geese, bacon, or whatever else he can in order to feed his family. Each night, Boggis, Bunce, and Bean try to kill Mr. Fox, but are outwitted.

Finally, Bean hatches a plan where he, Boggis, and Bunce will stake out Mr. Fox’s hole, and shoot him when he emerges. Mr. Fox is not expecting this trap, and has his tail shot off while scurrying back into his hole. The three farmers decide they will not wait for Mr. Fox to emerge, so they grab shovels and begin to dig out Mr. Fox’s home. Mrs. Fox and the Small Foxes are terrified, but Mr. Fox reminds them that foxes can dig faster than people. The entire Fox family begins to dig new tunnels to get away from the farmers.

Furious and exhausted, Boggis, Bunce, and Bean decide the only way to get Mr. Fox is to dig out the entire hill. Using two mechanical shovels attached to their farm tractors, they begin to tear up the hill. Mr. Fox and his family continue to dig deeper. Still unable to get to Mr. Fox, Boggis, Bunce, and Bean decide to wait him out with shotguns in hand. Days pass. Mrs. Fox grows weak from worry and hunger. Mr. Fox knows the situation is desperate, so begins digging once again with his children.

The Fox family runs into Mr. Badger and his son, who are horrified with what the farmers have done to the hill. Mr. Badger reveals that all the diggers –including the Rabbits, the Weasels, the and the Moles have all been forced underground. Mr. Badger blames the entire situation on Mr. Fox, who accepts the blame and says he has a plan to save everyone. Along with Mr. Badger, Mr. Fox digs his way into one of Boggis’s chicken house, where several chickens are stolen. Mr. Fox and Mr. Badger next dig to Bunce’s storehouse, where prepared ducks, geese, ham, bacon, and vegetables are being kept to be sold at market. Mr. Fox oversees the taking of just enough food to feed everyone, but not enough to be noticed missing. Mr. Fox then does the same with Mr. Bean’s secret cider cellar, where apple cider is taken to round out a meal.

Mr. Badger questions the moral nature of their stealing, but Mr. Fox says they are only stealing to feed their children and stay alive. Mr. Fox explains that stealing food pales in comparison to trying to kill someone. Mr. Badger accepts this reasoning. He and Mr. Fox then return to the tunnels, where a giant dining hall has been dug out and the families of all the diggers are assembled. A tremendous feast is had, where everyone cheers Mr. Fox as fantastic. Meanwhile, Boggis, Bunce, and Bean remain waiting at the entrance to the tunnel above, totally unaware of what is going on.