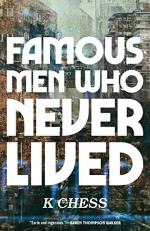 K. Chess
This Study Guide consists of approximately 52 pages of chapter summaries, quotes, character analysis, themes, and more - everything you need to sharpen your knowledge of Famous Men Who Never Lived.

This detailed literature summary also contains Quotes and a Free Quiz on Famous Men Who Never Lived by K. Chess.

Famous Men Who Never Lived in a science fiction novel about the existence of an alternate universe. Three years before the events of the plot, 156,000 people, including protagonists Helen “Hel” Nash and her boyfriend Vikram Bhatnagar passed through the Gate. The Gate was constructed in the alternate universe after terrorists attacked U.S. power plants, causing a fallout of roving radiation clouds. Those who passed through found themselves in a slightly skewed version of their own universe. The people that came through the Gate were referred to in their new home as “UDPs” (18) (Universally Displaced Persons). When the novel begins, Hel arrived at a house in the Brooklyn, NY neighborhood of Brownsville that, in her world, had been owned by famous sci-fi writer Ezra Sleight, most well-known for his novel The Pyronauts. In this universe, the house was owned by Dwayne Sealy, a man who inherited it recently when his grandmother passed away. Hel contemplated buying the house from Dwayne and using the space to establish a museum celebrating the culture and history of the other universe. Meanwhile, Vikram, who was an expert on Sleight's literature in the other universe, now worked as a security guard in a storage facility. One day he saw a blue light emanating from one of the storage units, a blue the exact same color as the Gate. Hel asked her friend Dr. Oliveira, a renowned epidemiologist and UDP spokesperson, for help with her idea, and he introduced her to Ayanna Donaldson, a museum director. Hel showed Donaldson Vikram's copy of The Pyronauts, and she set up a meeting for Hel with her intern, Teresa Klay.

Hel took Teresa Klay to the boarding school Ezra Sleight attended as a boy. It was significant, because Sleight had written about a painting there, called The Shipwreck, that had terrified him. It featured a shipwreck and a drowning man. Sleight had been so frightened of the painting, he refused to go near any body of water. When they arrived, however, the painting was not there. Since Sleight had never seen it, he had not been afraid of water, and consequently had drowned at age 10 in this universe. Hel reflected on her grief at having left behind her young son Jonas (who lived with his father in California) when she passed through the Gate. Ayanna Donaldson told Hel the museum was not a good idea, but after this conversation, Hel realized Donaldson still had Vikram's copy of The Pyronauts. Meanwhile, Vikram went to Dwayne Sealy's house with his friend Wes, and the three men began working to clean it up and remodel it.

Vikram discovered that the blue light in the storage facility was not a gate, but it was a device used to communicate with the other side. Its owner was a woman named Lida Cristaudo, a colleague of the scientist who created the Gate. She mentioned that the first person who came through the Gate was a graduate student named Ree, and that she had as of yet received no reply from the other universe. Hel began following Ayanna Donaldson, and her wife Angeline Silva to and from their home and jobs, hoping to somehow retrieve The Pyronauts. She was eventually caught doing this, and Donaldson filed a restraining order against her. Vikram told Hel he was getting Sealy's house in order, and she responded that the museum idea was futile; no one cared about the UDPs and their history. Vikram tried to get Hel to talk about her grief related to her son, but she refused. She accused him of likewise repressing his feelings because he never discussed his life and passions from the other universe. Vikram angrily stormed out and moved into the house in Brownsville.

Hel continued to watch Donaldson's house, hoping for an opportunity to break in and retrieve The Pyronauts. One day, she watched Donaldson leave the house and get accosted by a mugger just down the block. Hel raced in their direction and scared Donaldson's attacker away. Hel asked Donaldson to return The Pyronauts and Donaldson insisted she did not have it. Hel left, but she was stopped a few blocks over and arrested for violating the restraining order. Hel called Dr. Oliveira from jail, and he paid her bail. When she got out, she went to Calvary Cemetery, the former site of the Gate. There she came upon Dwayne Sealy, who was mourning his brother, who passed away two years prior from cystic fibrosis complications. Dwayne told Hel she needed to find a way to grieve her son in a healthy manner. Meanwhile, Vikram found the painting from Ezra Sleight's boarding school in Dwayne's house. He could not find Hel, so he contacted Teresa Klay and told her about it. He then returned to the house later to show the painting to Wes and discovered Teresa there. She had soaked the painting in gasoline and she was holding a lighter.

Hel arrived on the scene and approached Teresa, holding a knife to her throat (which was not a knife at all, but a plastic flower from the cemetery). Vikram realized that Teresa was Ree, the graduate student that passed through the Gate before the other UDPs. Teresa said that she hated UDPs and the universe they all (including herself) came from. Hel felt pity for Teresa and hugged her, discovering The Pyronauts in her waistband.

The novel flashes forward one year in the future. Vikram and Hel are no longer romantically involved, though they still love each other. They meet in a Home Depot parking lot to purchase supplies for Hel's museum. This project has helped Hel find meaning in her life. Vikram has started taking a poetry class at the local community college. The museum is called the Divergence Memorial House.

More summaries and resources for teaching or studying Famous Men Who Never Lived .