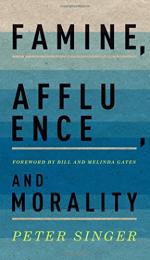 Peter Singer
This Study Guide consists of approximately 26 pages of chapter summaries, quotes, character analysis, themes, and more - everything you need to sharpen your knowledge of Famine, Affluence, and Morality.

Published in a 1972 issue of Philosophy & Public Affairs, Peter Singer’s “Famine, Affluence, and Morality” is an essay that explores the practical ramifications of utilitarian ethics. While the essay does not explicitly vouch for utilitarianism, Singer puts forth an argument regarding the moral necessity of altruism, by making the claim that people with means should be morally obligated to donate to charity. He bases his argument in a case of famine in India, which was happening at the time of writing, in 1971.

Singer begins his argument by alluding to the starvation of nine million Bengali refugees that occurred largely as a result of their civil war. Yet, he argues, people around the world have it in their power to prevent such large-scale suffering from occurring, but have not done so: not enough money has been donated to relief funds, nor have people approached their governments to push them to provide more assistance. While countries such as Britain and Australia have provided monetary assistance to help alleviate the famine, it is nowhere near the amount required, forcing India to draw from their own development fund, which will only exacerbate the famine in the future. Singer then argues that the way that people respond to situations like the one in East Bengal and others like it around the world is morally wrong. The implications of his argument, he contends, will require a significant reconfiguration of essential moral values and the way that those values are carried out in society.

He starts his argument with the claim that suffering from a lack of basic human necessities is bad. Next, he argues that if it is within the capability of an individual or collective to prevent a bad thing from occurring, then it should be a moral necessity to do so without causing something of equivalent harm to themselves. Singer’s above stated principle does not take distance into account, meaning that an individual is equally obligated to help those that are far away just as those nearby. Additionally, it does not matter if this individual is the only one that can help, or one among many.

Singer provides a hypothetical example in order to demonstrate that the number of people donating matters: if everyone believes that those with a comparable income to their own donate £5 in order to help relieve the famine, then they would also believe that there is no need to donate more than that amount. However, Singer argues that since it is not the case that all people that can donate £5 will do so, an individual should donate more than £5, without incurring any detrimental effect upon themselves. He then considers a counterpoint to his example; if everyone follows the former principle and assumes that they should donate more than the £5 minimum, there might be more donated funds than needed. Singer responds by claiming that this would not happen because it is not “expected” that everyone donates £5, so there is no real concern that there would be too many donations (234). Also, in reality, these donations would not occur all at the same time, meaning that people can gauge over time how much relief is needed.

Next, Singer claims that his argument complicates the usual moral distinction between a “duty” (what is required) and “charity” (what is not required, but is good to do so). He adds that the current view in society is that giving to charity is a good thing, but that nobody will be reprimanded for not doing so. Singer argues that we should all be morally obligated to give money to humanitarian causes, which means that it is morally wrong to not give money to such causes. Singer says that some will say that his view is too extreme – claiming something is morally wrong should be reserved for those acts that are undoubtedly wrong, such as stealing. Singer’s response is that even though his view may seem extreme, it is logically sound – his conclusions follow from the premises. He adds that certain actions are considered wrong in society simply because it would disturb the peace of the whole if they were not.

Singer addresses another concern, namely that moral standards should not be too strict, otherwise nobody will follow them, leading to a rejection of all moral standards. Singer responds that it is unlikely that this would occur; there is no “limit” to morality when trying to judge for oneself what the best possible thing to do is. Another objection is against his utilitarianism, specifically that his argument requires everyone to devote their whole existence to increasing world happiness over misery. He replies that this is irrelevant, since his argument states that one should donate without causing any significant harm to themselves.

He then addresses a “practical” objection: that charitable aid should be the government’s responsibility, for if people give privately then the government will shirk its responsibilities to help. Singer says that on the contrary, the government will only help if it feels that its citizens care about the cause. The last objection that Singer addresses is that giving to charity is a temporary solution to starvation, because it does not solve the problem of overpopulation which will surely contribute to more poverty in the future. Singer replies that this does not mean we should not try to help, and that there are charities geared towards overpopulation.

Finally, Singer argues that we should donate to the point of “marginal utility,” meaning, to the point where donating more would cause ourselves comparable harm (241). He concludes the essay by saying that philosophy is meaningless if it is not geared towards real problems. Suffering is a problem that pervades the world, but it is within human ability to do something about it.

More summaries and resources for teaching or studying Famine, Affluence, and Morality.