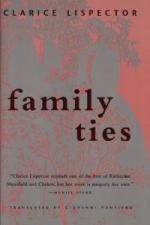 Clarice Lispector
This Study Guide consists of approximately 40 pages of chapter summaries, quotes, character analysis, themes, and more - everything you need to sharpen your knowledge of Family Ties.

"Family Ties" is the title story of Clarice Lispector's Lacos de Familia (Family Ties ). A play on the word "ties" suggests the tension of the story, between the ties that connect and the ties that bind one to family members. Like many of the other stories in the collection, "Family Ties" concerns men and women who, when faced with a moment of epiphany in their relations with others, tragically choose not to communicate openly, but to perpetuate a sense of alienation within family bonds. The story concerns a woman, Catherine, who is relieved when her mother departs after a visit, because their relationship is strained and artificial. They cannot reach each other emotionally and fear doing so. They ignore the deepest part of their feelings for each other, since both hate and love reside there. Almost in retaliation for her own imprisonment, Catherine begins the process of re-creating the same bonds with her young son at the end of the story. She has learned the nature of her anguish from a moment of epiphany, yet rather than right this wrong, she commits it to her son's legacy. The phenomenological narrative style of the story was a landmark in Brazilian literature, opening the door to experimentation with form and language. Clarice Lispector's fiction spans the modern and postmodern eras, representing the human mind in an eloquent and fluid style and probing metaphysical questions of being, identity, and language. This is a story that does not preach, but that exposes essential and tragic human qualities in a quiet, haunting way.

More summaries and resources for teaching or studying Family Ties.

Family Ties from Gale. ©2005-2006 Thomson Gale, a part of the Thomson Corporation. All rights reserved.