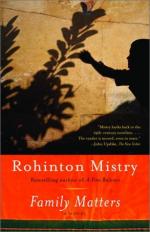 Rohinton Mistry
This Study Guide consists of approximately 55 pages of chapter summaries, quotes, character analysis, themes, and more - everything you need to sharpen your knowledge of Family Matters.

This detailed literature summary also contains Topics for Discussion and a Free Quiz on Family Matters by Rohinton Mistry.

Family Matters takes place in present day India. The family of Nariman Vakeel, including his daughter and her husband, Roxana and Yezad Chenoy, their two sons, Murad and Jehangir, and Vakeel's stepchildren, Jal and Coomy Contractor, lives in Bombay. At the opening of the novel, Nariman is living with his stepchildren in a large flat in a building known as Chateau Felicity. It is where Nariman lived with his wife, Yasmin, and where they raised their family until Yasmin's untimely death some years before the start of the story.

As the story begins, Coomy is preparing to have a party for Nariman's 79th birthday. Roxana and her family are coming over. Coomy is worried by Nariman's practice of going alone for a walk in the evening. He is beginning to show early signs of Parkinson's disease and she is afraid he will hurt himself. Indeed, he does come home banged up a little from a fall in a ditch, but she is not able to get him to say he will no longer go for walks.

The day after the party Nariman has another fall during his evening walk. This time he breaks an ankle. Jal and Coomy get him to the Parsi General Hospital where Dr. Tarapore sets the ankle and has a plaster cast put on. Jal brings him back to the Chateau Felicity flat couple of days later; Coomy is out at the fire temple. She has acquired a commode that sits in Nariman's bedroom, but it is very difficult for him to use, since he cannot move around by himself. They switch to a bedpan and urinal, but that does not work much better. Coomy is terribly put-upon having to deal with her stepfather's excretions. She complains loud and long. She finally convinces Jal that they must take Nariman over to Roxana's and let her look after him. Nariman agrees to the move only if they have gotten Roxana's approval; actually, they have not even told Roxana about the accident, and Coomy has no real intention of seeking her approval. She and Jal load Nariman into an ambulance and take him over to Roxana's tiny flat.

Roxana does, of course, take her father in, even though she and her husband, Yezad and their two sons, Murad and Jehangir, live in a very crowded 2-room flat. The expectation is that he will need to be there only three weeks, so even Yezad does not complain. The boys are delighted to have their grandfather there. Jehangir, especially, pitches right in and feeds him.

Money quickly becomes a major problem. Yezad, who is an honored employee at the Bombay Sporting Goods Emporium, tries various things to help fatten the family budget envelopes. He even tries playing the local numbers game, but manages to lose just about everything they have when the numbers game is shut down. His boss at the Emporium has expressed an interest in running for office, which would give Yezad more responsibility and more money, but then changes his mind (his wife disapproves). Yezad work up a plan aimed at getting the boss back on his track, but his plan works out very badly and the owner winds up getting killed in the course of it. The owner's widow closes down the store and Yezad is out of a job.

Coomy, fearful that her stepfather will be returned to her care, knocks down the plaster ceilings in her flat to make it unlivable. In a terrible accident that occurs when a handyman neighbor and Coomy are working on the ceiling of Nariman's bedroom. A heavy beam slides off its supports and kills both Coomy and the handyman.

Following Coomy's death, Jal persuades Roxana to move her entire family into the flat in Chateau Felicity with him. He even goes to the extent of finding a buyer for their 2-room flat. At the end of the main part of the novel Roxana, Yezad, and the boys take Nariman back to Chateau Felicity.

There is an Epilogue that takes place five years later. Nariman is still an invalid; after his ankle heals his Parkinson's disease keeps him confined to his bed, virtually unable to communicate.

More summaries and resources for teaching or studying Family Matters.