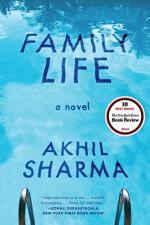 "Family Life" begins with the narrator being 40 years old, even though through the rest of the novel he goes from 8 years old to adulthood. Ajay tells the reader of a moment with his parents where they laugh and tease each other, giving the reader insight into how his family evolves over time, since no story stays on 'happiness' for its entirety.

Ajay is 8 years old when his story starts. He describes his parents as hard-working, yet struggles to understand his father's purpose in the family since his mother is the main caretaker and he just doesn't have a strong bond with his father. He has a 10-year-old brother, Birju. The two of them play together regularly with other kids in their Delhi, India, community. The family lives in two cement rooms on top of a house. Their mother's extreme frugality is described in how she has them split matches in half to double the use of the box.

Ajay's father moves to America about one year before Ajay, Birju, and their mother Shuba. He sends plane tickets in August for them to arrive in Queens, New York, in October. When the tickets arrive, opening them is a community event. Emigrating from India to America in the 1970s was considered an event. The family sells off almost everything they own, and keep only what they can carry onto the plane.

Once Ajay, Shuba, and Birju arrive in America, the boys are enthralled with the differences between where they are and where they came from. Hot, running water available at all times and a large, stocked library are two luxuries Ajay appreciates. Cable television, especially "Gilligan's Island" is another treasure for Ajay as he acclimates to life in America. Birju finds it easy to make friends, and even gets a girlfriend. Ajay has the opposite experience: until 10th grade, he doesn't have any friends or girlfriends.

When Ajay is 10 years old and Birju is 12, the summer after Birju is accepted into the Bronx High School of Science, Birju slams his head on the bottom of a pool while visiting his aunt in Arlington, Virginia. He becomes permanently brain damaged and is now in a vegetative state for the rest of his life. From this point on, everything revolves around Birju's accident. The family prays daily, even creating an altar in Birju's hospital room as well as at his aunt's house. Shuba temporarily moves down to Virginia while Rajinder, Ajay's father, stays in New York during the week to work and then comes to visit on the weekends. Shuba and Ajay visit Birju every single day.

Rajinder, Shuba, and Ajay each have their own way of dealing with Birju's accident, and all three of their coping strategies evolve over time. Shuba's main coping strategy is to focus on what she can do in the here-and-now, rather than focus on the accident or on what could have been had Birju never gotten into the accident. Ajay's coping strategies involve blind, obligatory behavior, then escape by way of books, then outbursts of anger toward his mother, escape by way of having a girlfriend, academic discipline, and finally career success. Rajinder's coping strategy is denial, though it takes on more than one form: talking about what he wishes life could be; drinking alcohol to excess; and ignoring his family all together.

After several months in the hospital, and after Shuba makes sure the insurance company will pay for a nursing home, Birju is moved from the hospital in Arlington to a nursing home in Metuchen, New Jersey, where the Mishra family now lives so they can be close to the nursing home and also close to a temple. Again, Shuba and Ajay visit Birju every single day. Unfortunately, the nursing home doesn't take good care of Birju; they feed him too much at one time, they forget to reposition him, and objects are often found under Birju, even a pair of scissors. Shuba's outrage is apparent and therefore, the family decides to bring Birju home so they can care for him there.

Once Birju is brought home, the Indian community shows their constant support for the Mishra family. Though this seems to only help Shuba and not Ajay or Rajinder, it does show a sense of togetherness and unity that tends to be present among immigrant communities. Neighbors and other members of the Indian community visit to bring food, spiritual encouragement, or just a distraction. Self-proclaimed miracle workers also come to visit, claiming they can heal Birju. None of them do, and Ajay remains skeptical of their presence.

Bringing Birju home proves to put even more of a strain on the family unit. Rajinder becomes an alcoholic and spends most of his time drinking. His help with Birju becomes less and less, and is eventually nothing. Ajay and his mother end up being the main caretakers, as they bathe Birju, feed him, engage him during their card games, tease him, and exercise him. Though they work together to care for Birju, this puts an enormous strain on Ajay and his mom's relationship. Ajay continues to feel isolated from his parents, and his mom continues to bear the burden of being the main emotional caretaker of the family. While Rajinder provides financially, it is Shuba who must bear the emotional weight of the family.

Rajinder's alcoholism gets worse and worse. Once, he quits for several months, but one night of one drink and he starts again. He quits again, but this time it was after being drunk enough that he was missing work, vomiting on the carpet, and had spent an entire winter's night outside in the backyard because of being so cognitively unaware. Eventually he checks himself into Bellevue Hospital in Manhattan where he attends rehab for about a month. Ajay and his mom visit every day. When he is released from the hospital, Rajinder begins attending Alcoholics Anonymous meetings, accompanied by Ajay at his mom's request. This time, Rajinder's sobriety sticks.

Ajay has spent his adolescence working for good grades, all as an attempt to prove to his parents that he is not Birju, but also that he wishes he could be. However, his parents are so lost in their own grief that they tend to not pay Ajay very much attention. Ajay tries several things to get his parents' attention, mostly getting good grades, behaving perfectly, and helping out with Birju, though he seems unaware that his efforts are for this purpose; Ajay sees his efforts as a way to push down his own self-shame that he cannot be like Birju.

Ajay decides to get a girlfriend in 10th grade. He dates Minakshi into their freshman year of college. Being with Minakshi gives Ajay a way to dream of a better future than he's ever before been able to do. Though this hope excites him and gives him some relief from feeling forever stuck in his family's situation with Birju, it also angers him that this hope has to be deferred until he can leave the house.

Ajay gets accepted into Princeton University, a result of his hard work and discipline throughout high school. However, he does not see it as an accomplishment for himself, but rather for his mother since she is the one who raised him and expected perfection out of him, especially given her other son's permanent vegetative state. Once at Princeton, Ajay does very well. He gets a job after graduation as an investment banker, and subsequently makes a lot of money. He saves most of it, and sends a good bit of it to his parents so they can have some financial relief in caring for Birju. Though his mom is wary of spending it at first, she comes to spend it on a nurse that can be with Birju 24 hours a day, seven days a week, so that the family might have some relief.

The novel seems to end within a few years of where the novel began. When the novel began, Ajay was 40 years old. When the novel ends, he is about 10 years removed from college. He is on vacation at a resort in Mexico with his current girlfriend, Hema, a lawyer. He is surrounded by beauty and serenity, feeling happiness for one of the only times in his life. Yet, the happiness weighs heavily on him and he doesn't know what to do with it or where to put it. In that moment, when he is filled with happiness yet cannot enjoy it, Ajay fully realizes the damage done by his tumultuous, grief- and rage-filled family life.