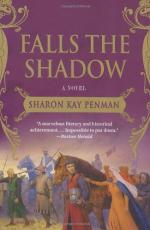 Sharon Kay Penman
This Study Guide consists of approximately 35 pages of chapter summaries, quotes, character analysis, themes, and more - everything you need to sharpen your knowledge of Falls the Shadow.

This detailed literature summary also contains Topics for Discussion and a Free Quiz on Falls the Shadow by Sharon Kay Penman.

Falls the Shadow is the second novel in the medieval trilogy by Sharon Kay Penman. In this novel, Simon de Montfort talks his way into an earldom before scandalizing all of England by marrying the King's favorite sister. Simon then fights in the Holy Lands, acts as the King's Seneschal in France, and rescues his king from rebellion. In all this, Simon lives his life according to a strict chivalric code of his own making. It is this chivalric code that also causes Simon to turn against his King and fight for the rights of all people, common man and lords alike. Falls the Shadow is the story of a unique, brave man who fought for what was right even when his methods seemed wrong.

Simon de Montfort is a second son, therefore he is not eligible to inherit his father's lands and titles. However, the lands and title of Earl of Leicester were taken from Simon's father by King John. Simon goes to the current Earl of Leicester and talks him into returning the lands to Simon. This trick works and soon Simon becomes a respected lord in England despite his French birth. A few years later, Simon has several occasions to get to know Nell, the favorite sister of King Henry III. When Simon asks Nell to marry him, she refuses because she knows that her brother will never allow the marriage because Simon is not of the high birth her brother would want for her. However, Simon convinces Nell of his desire. Together Nell and Simon face Henry and convince him to agree to the marriage with a little white lie. Nell convinces Henry she is pregnant with Simon's child.

After marriage to Nell, Simon's relationship with Henry becomes strained. Henry becomes so angry when he realizes that Nell and Simon lied to him that he accuses them in front of witnesses. Later, Richard, Nell's other brother, is forced to talk Henry out of having Simon arrested. The young couple flees to France. From there, Simon joins the fight in the Holy Land, leaving Nell in Italy with their two young sons. Simon's homecoming over a year later is one of great happiness.

Having reconnected with Henry, Simon is appointed the king's seneschal in Gastony France. Simon is charged with squashing a rebellion that has broken out there. However, Henry is unhappy with Simon's methods and brings him before a court of his peers to face charges. Simon is acquitted, but this acquittal further outrages Henry. Simon agrees to leave his post if Henry will pay his expenses, as promised, but Henry refuses. Simon returns to Gastony where he continues to stop the rebellion with his own heavy handed method. Finally Henry pays off his contract and forces him out of Gastony. A short time later, Simon is offered to be seneschal in France while the King is out of the country, but Simon turns it down because he has pledged his loyalty to King Henry. In the end, Simon ends up saving Henry in Gastony from the very rebels Henry freed after running Simon out of the territory.

King Henry has reunited with his half-siblings born to his mother and given them a great number of lands and positions of power. These half-siblings have taken advantage of their position to overrun and, at times, murder the common man. Simon and many of Henry's lords recognize the danger in what is happening and encourage Henry to rid the country of these men. Henry refuses. Simon leads an army against Henry and forces him to surrender, a surrender that leads to the Oxford Provincials, a list of demands that will force Henry to take from his siblings their lands and titles in England. Henry at first agrees to follow the Provincials, but later renounces them. When both the Pope and the King of France come down on Henry's side, Simon knows he must go to war against his King.

The war seems like an easy win for Simon because Henry is not a good battle commander. However, Edward, Henry's first born son, is. Edward manages to win a strong victory against Simon's army at Northampton. However, Simon is able to get the advantage over Henry at Lewes when Edward leaves the battle to exact revenge on a group of Londoners. Simon takes Henry captive and forces him to rule the country by the edict of the Oxford Provincials. This lasts more than a year, until Edward escapes Simon's control and leads an army against Simon. Simon is killed at Evesham. Henry regains his crown and punishes the Londoners who supported Simon, including the mayor Thomas Fritz Thomas who was so instrumental in Simon's war against Henry.

More summaries and resources for teaching or studying Falls the Shadow.