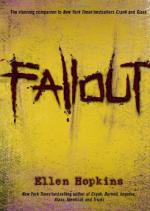 Ellen Hopkins
This Study Guide consists of approximately 24 pages of chapter summaries, quotes, character analysis, themes, and more - everything you need to sharpen your knowledge of Fallout.

This detailed literature summary also contains Topics for Discussion and a Free Quiz on Fallout by Ellen Hopkins.

Fallout by Ellen Hopkins is the third book in her Crank series. Fallout focuses on three of Kristina's five children who are struggling with the legacy of her drug addiction. Hunter is a college student with a great job and a wonderful girlfriend, but cannot seem to control the compulsion to use drugs and cheat on his relationship. Autumn struggles with panic attacks and OCD. Summer has lived in and out of foster homes most of her life and still struggles with the abuse she suffered as a small child at the hands of both her father's girlfriend and a foster father. Fallout chronicles how these three children of a crank addict blindly find their way to one another and to their own special brand of recovery.

Hunter is haunted by his own eyes. Hunter knows his eyes belong to the man who fathered him, a man Kristina swears raped her. Hunter wonders what that makes him. Autumn struggles with panic attacks and OCD. At school, Autumn might as well not exist for the number of people who notice her. Until Bryce. Summer is in yet another foster home. Her only joy each day is her boyfriend, Matt. Lately, however, Summer has noticed that Matt's best friend, Kyle, has been offering more than friendship toward her.

Hunter's girlfriend, Nikki, learns her parents are divorcing because of her father's affair. Hunter wants to support Nikki, but he cannot help but think that she is still luckier than he because at least she knows who her father is. Autumn and Bryce begin to spend more time together and Autumn is shocked when he makes it clear that she is the girl he wants. Summer learns that her foster sister is using crank and that she has sexually abused another foster sister. Summer has to stand up against this abuse because she knows how deeply it scars. However, standing up for the right thing does not always have the right consequences.

Hunter cheats on his girlfriend and hopes to get away with it, even though the guilt is tearing him up inside. Autumn and Bryce become intimate and Autumn secretly hopes she will become pregnant. At the same time, Autumn realizes she is losing her aunt as Aunt Cora prepares for her wedding day. Summer is placed back with her father, a double-edged sword that leaves her confused and alone. Summer turns to Kyle for support, realizing that he, despite his anger issues and drug use, is the only one who truly understands her.

Hunter meets his biological father. When Hunter confronts the man who raped Kristina, he realizes that he is just a good man who allowed crank to control his life. Brendan has cleaned up and served honorably in the military, showing Hunter that it is possible to overcome the legacy of the monster. Autumn meets her own father for the first time since she was a small child and decides she wants to meet her mother as well. Autumn insists on a road trip to Nevada. Summer is forced into yet another foster home when her father is arrested for DUI. Rather than live miles from Kyle, Summer and Kyle decide to run away.

After confronting his father and making amends to Nikki, Hunter confronts his mother over Christmas dinner, saying all the things his siblings cannot. Autumn arrives in Nevada with her father and discovers the root of her anxiety problems and begins to overcome them. Summer meets the sister that she did not know about and with the help of her siblings, confronts the legacy of being Kristina's daughter.