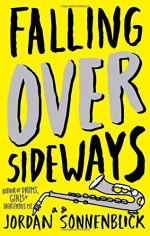 Related Topics
After Ever After

Jordan Sonnenblick
This Study Guide consists of approximately 37 pages of chapter summaries, quotes, character analysis, themes, and more - everything you need to sharpen your knowledge of Falling Over Sideways.

This detailed literature summary also contains Quotes and a Free Quiz on Falling Over Sideways by Jordan Sonnenblick.

The following version of this book was used to create the guide: Sonnenblick, Jordan. Falling Over Sideways. Scholastic Inc., 2016.

In Jordan Sonnenblick's Falling Over Sideways, eighth-grader Claire Goldsmith had no idea what challenges her final year of middle school would present to her. At the start of the school year, Claire was consumed by the dramatics of her social life, her dance friends', Alanna and Katherine's, advancement to higher level classes without her, and her inability to earn first chair in band. Not only did Claire believe she was losing her closest friends, she felt she was a failure at everything.

One night, when her father, David, asked her how dance had gone, Claire snapped. She accused her father of not understanding her feelings, and told him he obviously had never struggled the way she had. The next morning, alone at the kitchen table with her dad, Claire was shocked and terrified when he began to have a mysterious episode, convulsing and babbling without explanation. Unable to get ahold of her mother, Nicole, or brother, Matthew, Claire called 9-1-1. With the help of the paramedics, she got her father the help he needed before it was too late.

Finally, the rest of her family showed up in the hospital waiting room, where the doctor announced that David had suffered a significant stroke. Later, when they were finally allowed into his room in the ICU, the family was shocked at David's weak condition. The doctor told them it was a miracle he was alive, but that he would be unable to speak or walk. In the days following, Claire and Matthew returned to school. Claire did not want to tell any of her friends about what had happened. As the news gradually got out, Claire began feeling self-conscious; everyone kept asking if she was okay, telling her it was fine to feel depressed. Claire was furious, not wanting to be seen as weak.

In the meantime, her father eventually came home. However, Claire was not relieved by his return. She found his condition disturbing and upsetting, and stayed away from him as much as possible. Her mother and Matthew took on most of the care-taking responsibilities. Claire tried distracting herself with schoolwork, band practice, and dance rehearsals. Yet her father's unpredictable health condition constantly consumed her, and she began breaking down no matter where she was. Her teachers and classmates tried reminding her they were there for her, but Claire resisted their help.

One night, Claire decided to ask Matthew if he had told his friends about their dad. Matthew told her that everyone in his life knew, because he had sacrificed everything to help their family. Claire felt guilty for not having realized. During this serious conversation, Matthew helped Claire understand the importance of confiding in others, and her need to spend time with their dad. In the weeks following, Claire began telling their father stories, and playing her saxophone for him.

One day during school, shortly after Thanksgiving, Claire's father was readmitted to the hospital with pneumonia. When the school suddenly went into lockdown, Claire was unable to join her family at the emergency room. When Claire begged her science teacher, Mrs. Selinsky, to let her keep her phone on despite the school rules, Mrs. Selinsky became furious. All of the members of Claire's lab group suddenly got involved, defending Claire in the face of their most demanding and strict teacher. The experience made Claire realize the power of friendship. She was finally able to see how much she needed the support of others. Eventually she even told Alanna and Katherine about her family's difficulties, finally able to accept their love and encouragement.

Just before David was discharged from the hospital, he regained his ability to speak in full sentences. The family was overjoyed and filled with new hope. In the months leading up Claire's eighth grade graduation and culminating Dads' Dance recital, Claire began exercising with her father. She decided she could practice dance while her dad did his physical therapy routines. Over time, the two grew stronger together. On the day of the Dads' Dance, David unexpectedly appeared on the stage during Claire's final number, proving to her the power of love.

More summaries and resources for teaching or studying Falling Over Sideways.