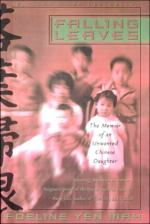 Adeline Yen Mah
This Study Guide consists of approximately 27 pages of chapter summaries, quotes, character analysis, themes, and more - everything you need to sharpen your knowledge of Falling Leaves.

This detailed literature summary also contains Topics for Discussion and a Free Quiz on Falling Leaves: The True Story of an Unwanted Chinese Daughter by Adeline Yen Mah.

Adeline Yen is the fifth child born to Joseph Yen and his first wife. The older four children are born close together, but three years lapse before Adeline's birth. The birth is easy and Adeline's father refuses to send his wife and newborn daughter to the hospital for recuperation. Adeline's mother dies a few days after her birth, possibly the result of an infection. Adeline's father never gets over the death of his wife and Adeline is considered an unlucky child because of the death of her mother. Adeline's Aunt Baba gives up her job at a bank to become caregiver for the children. Joseph remarries a short time later and his new wife hates the five stepchildren. Aunt Baba remains Adeline's chief caregiver and the only person who loves her unconditionally, gives her support and encourages her to excel in academics and to dream of a better future.

Adeline is tormented by her home situation, her stepmother Niang and her siblings. Though the five older children are treated exceedingly differently than the two children of Joseph and his second wife, the children become separated by the treatment they receive from their parents. Those who are willing to bow to Niang are treated more favorably than the others, even to the point of being given the fare for the tram rides to and from school. Adeline refuses to bow down to the demand that she beg for her tram money. When Adeline wants to go to college abroad, her father agrees, but only after Adeline wins a writing competition and Joseph's colleagues congratulate him on her success.

Adeline travels to Europe where she attends medical school and hopes to become an internal specialist. When her father tells her to change to obstetrics, Adeline agrees. She eventually does break with her father's career plans for her and goes to America where she works as an intern again. She marries but soon discovers that the man she'd married had lied to her repeatedly. She becomes his victim and is regularly abused. They have a son together and Adeline hesitates to leave him, fearing the stigma and the shame a divorce will bring her parents. When her father visits her in California, he urges that she protect herself and she takes that as permission to leave her unhappy marriage. She later marries a professor from UCLA who is everything she had hoped for from her first marriage. Though now in a happy marriage with a blooming career, she longs for a close relationship with her siblings and her parents. Her father dies, followed only a few years later by her stepmother. It's only after her stepmother's death that she discovers that her father hadn't intended that she be left out of his will. It's only then that her brother says that Adeline, alone of all the children, wanted a close-knit family and that none of the other children held that same desire.

More summaries and resources for teaching or studying Falling Leaves: The True Story of an Unwanted Chinese Daughter.