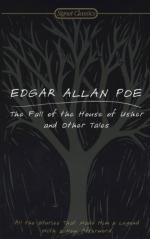 Poe's epic poem "The Raven," published in 1845, centers on a young scholar who is emotionally tormented by a raven's ominous repetition of the word "nevermore" in answer to his question about the probability of an afterlife with his deceased lover.

Poe's "Ligeia" is a long poem in which a husband narrates the story of his beautiful dead wife who returns from the grave and assumes the identify of his second wife.

"Young Goodman Brown" is a story by Nathaniel Hawthorne, a contemporary of Poe. Written in 1835, it concerns a newly married Puritan in New England who ventures forth one night against the wishes of his wife, Faith, and encounters several of his neighbors conducting satanic rituals in the woods.

Stephen King's novel The Shining (1977) tells how the evil forces in a remote resort hotel manipulate the alcoholic caretaker into attempting...