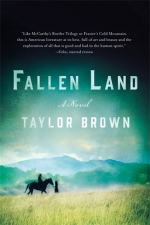 Taylor
This Study Guide consists of approximately 34 pages of chapter summaries, quotes, character analysis, themes, and more - everything you need to sharpen your knowledge of Fallen Land.

This detailed literature summary also contains Quotes and a Free Quiz on Fallen Land by Taylor.

The novel opens in the state of Virginia in 1864. Callum is a 15-year-old orphaned Irish immigrant who now rides with a group of bandits. The leader is known only as the Colonel. Swinney, a member of the group, is almost like a father to Callum. When the group discovers a 17-year-old girl named Ava living alone, the Colonel rapes and impregnates her. Callum quickly falls in love with Ava, and they escape together on a horse. Shortly before, the Colonel is killed by a group of soldiers. Ava and Callum speak of their past; they are both orphans. Ava’s father had been an accomplished medical doctor. They decide to ride to the coast of Georgia, as a distant cousin of Callum’s has married into a wealthy family there.

After Ava and Callum’s horse and supplies are stolen, Callum finds the thieves and asks for his things back. When the men attack Callum, he shoots and kills them in self-defense. In the altercation, he sustains a severe wound to the thigh, and Ava says that they need to find something with which to disinfect it. As they ride, they see the Colonel’s men following them. Callum infers that they must believe that he killed the Colonel. The men are led by a one-armed man that Callum does not recognize. Ava and Callum arrive at the home of a whiskey brewer named Lachlan. They use whiskey to disinfect Callum’s wound. Lachlan says that the one-armed man is a bounty hunter named Clayburn, who is famous for his skill and sadism.

Ava and Callum continue to ride south. In one small town, they notice a tavern with the horses of the Colonel’s men tied outside. Callum waits for Swinney to emerge from the tavern. When Swinney emerges, Callum tells Swinney that he did not kill the Colonel. Swinney says that he is unable to persuade the other men to cease the pursuit, as the Colonel’s places a large bounty on the head of whomever kills the Colonel, and it seems to the executor of the will that Callum killed the Colonel. Ava and Callum proceed to ride away. Ava and Callum soon arrive in the city of Atlanta, which has been mostly destroyed by Union soldiers. They ride through the city and survey the widespread destruction.

After leaving Atlanta, Ava and Callum eventually arrive at the home of a man who is said to be able to see the future. The seer says to Ava and Callum that one of them will die before the end of the year. The prophecy is fulfilled when one of the Colonel’s men shoots Ava; Ava survives, but her unborn child perishes. Swinney helps Ava and Callum escape, and Clayburn then kills Swinney. Callum works with Union soldiers to set up an ambush that successfully kills Clayburn and the other pursuers. Ava and Callum eventually arrive at the farm owned by the Gosling family, which is the family into which Callum’s distant cousin has married. The Goslings allow Callum and Ava to live and work there. Callum and Ava, having fallen in love, begin attempting to conceive a child together.

More summaries and resources for teaching or studying Fallen Land.