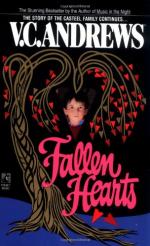 Virginia C. Andrews
This Study Guide consists of approximately 26 pages of chapter summaries, quotes, character analysis, themes, and more - everything you need to sharpen your knowledge of Fallen Hearts.

The main character, Heaven Leigh Casteel, thinks about life in her grandfather's cabin and how the promise of spring helps to wash away some of the tragedy she has faced recently, including the death of her fiancé, Troy, and the death of her brother, Tom. Heaven had been brought up in the Willies, a rural area of Virginia where life is very hard for the hill people. Heaven had been treated poorly until she inherited a great sum of money from her mother's family.

During these difficult times, Logan Stonewall has always been there for Heaven. The pair had a relationship when they were very young. Logan is grateful that Heaven has returned to the Willies and believes that their love is meant to flourish. Logan feels the same way about Heaven and proposes.

Heaven's family is a main part of the story. Due to the large number infidelity issues, the concept of family is quite confusing. Although Heaven's upbringing is tragic, she has a great need and respect for family. She adored her grandparents, particularly her grandfather, whose cabin she maintains. Heaven had always longed for a relationship with her father, Luke, especially since her mother had died in childbirth. Luke wanted nothing to do with his children, which is why he sold them, a fact that seems almost ludicrous in modern times. It is not until much later that Heaven finds out that Luke is not her real father. However, the damage is done. It is even more devastating when Luke remarries and has a son that he cherishes.

Logan and Heaven marry. Heaven's biological father and grandfather, Tony, immediately offers to build a factory in Winnerow and puts Logan in charge. Heaven and Logan will live at Tony's estate until they can build a suitable house in their hometown. Meanwhile, Tony desperately wants Heaven as a member of his immediate family. However, Tony does all of the wrong things to ensure that it will happen, including buying Heaven anything she could possibly want and buying Heaven herself in the agreement with Luke when he sold the circus.

Heaven discovers that her fiancé and uncle, Troy, is still alive. Heaven and Troy rekindle their romance for one night during which Heaven becomes pregnant. Logan is also unfaithful at this time, impregnating Heaven's sister, Fanny.

The battle between the moral and ambitious Heaven and her opportunistic and promiscuous sister heats up as they battle over custody of Luke's son, Drake. Heaven pays Fanny off to keep Drake.

The story ends when both sisters give birth. Troy sends a present to his daughter and Heaven promises that unlike her own mother, she will tell Annie the truth about her father.

More summaries and resources for teaching or studying Fallen Hearts.