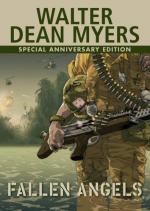 Richie Perry is a recent high school graduate who gave up dreams of an expensive college education to join the United States Army. An excellent writer, Richie hopes one day to be able to write like the author James Baldwin. In the meantime, he sends money home to support his younger brother and mother. Richie has a strained relationship with his mother, an alcoholic who suffers from depression, and worries about his teenage brother’s safety in the racially tense streets of Harlem.

Richie is en route to Vietnam when the book opens. He was trained in Fort Devens, Texas and is being sent with his unit to the conflict he hears is almost over. He meets Army nurse Judy Duncan and his squad mate Harold “Peewee” Gates on the flight. Judy leaves for an Army medical facility and Richie and Peewee are sent to join the Twenty-second replacement company. Richie hears the company will soon be leaving for Hawaii as peace talks are in the works and he talks to another s

oldier who has been there nine months without seeing any fighting.

As time goes on, however, Richie finds himself in the middle of combat and death. His squad mate Jenkins is killed a few weeks into the tour of duty after stepping on a booby trap set by the Americans. On patrol with television crews, Richie’s squad kills a Vietnamese man and claims he is an enemy soldier, though the papers on the man prove otherwise. Richie sees official paperwork from the incident and notices his company’s commander, Captain Stewart, has written three enemy soldiers were killed. It becomes clear to Richie that Captain Stewart is more interested in getting a promotion than he is in sending his soldiers home alive.

When Richie’s commander, Lieutenant Carroll, is killed in combat, Richie and his squad are grief-stricken and Richie really begins to question his role in the war. He debates whether to tell his mother and his brother Kenny the truth about the war, especially after he kills someone, or to remain vague in order to protect them. Word gets around camp that Richie is a good writer and he is asked to write letters to deceased soldiers’ families, and even to Peewee’s ex-girlfriend. Captain Stewart tells Richie if he knew how to type, he would put him behind a desk to work for him in the office.

As combat amps up, Richie becomes more comfortable fighting. He is wounded in battle and flown to a military hospital to recover. His wounds are not serious enough to be sent home and he spends a few weeks recovering. Richie meets other soldiers in worse shape than he is and Judy Duncan, the nurse from his trip over, visits him in his hospital bed. When Richie has to return to his squad, he is nervous and considers running away rather than fighting again. He relizes he has nowhere to run, however, and returns to fight with his squad.

As troops dwindle, a haughty soldier in the squad named Brunner is asked to lead them on a dangerous patrol to track down North Vietnamese forces along a river. Brunner’s inexperience shines through and Richie and his squad find themselves trapped in a firefight. Richie and Peewee escape to a ridge and spend the night in a spider hole. The next morning they return to the helicopter landing zone and observe Vietnamese troops planning an ambush when the helicopter lands. Richie and Peewee begin firing at the hidden troops as the helicopter approaches, forcing them out of hiding and into the fire from the choppers.

Richie and Peewee are both injured trying to board the helicopter and are sent to a military hospital. They are told they will both be returning to America. Richie pays a record keeper to look up the whereabouts of Judy Duncan and finds out that she was killed when a field hospital came under fire. Richie and Peewee stand tall with their injuries as a plane of new recruits lands. On the flight back home, the young men hold hands in a display of friendship, loyalty and relief to be leaving the war.