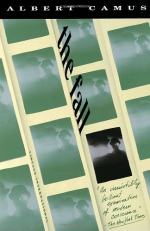 Get The Fall from Amazon.com
View the Study Pack
View the Lesson Plans
Study Guide
Order our The Fall Study Guide

Albert Camus
This Study Guide consists of approximately 45 pages of chapter summaries, quotes, character analysis, themes, and more - everything you need to sharpen your knowledge of The Fall.

The Fall Summary & Study Guide includes comprehensive information and analysis to help you understand the book. This study guide contains the following sections:

This detailed literature summary also contains Literary Precedents and a Free Quiz on The Fall by Albert Camus.

In a bar in 20th century Amsterdam, the narrator, Jean-Baptiste Clamence - a one-time Parisian lawyer and power-hungry narcissist - meets a fellow French ex-patriot and former lawyer. Through a lengthy, one-sided discussion of his own unprincipled life and ideas, Clamence succeeds in unburdening himself and demoralizing his companion.

Clamence at first appears to be friendly and helpful, acting as intercessor for a fellow displaced Frenchman and the Dutch-speaking bartender, but he soon becomes more than just a Good Samaritan. The monologue that follows is far from everyday chit-chat. Clamence speaks of the corrupting influence of modern society on simple minds, bourgeois character, and human nature generally. He introduces himself as a "judge-penitent" - a paradoxical profession that Clamence will take the entire narrative to explain. There is a suggestion toward the middle of the first chapter that Clamence's companion is attempting to disengage himself. He prepares to leave, asking Clamence for directions to his hotel. Clamence's response is not to provide the information for which he is asked, but to insist on accompanying the man almost to his doorstep. As the text moves along, however, Clamence's companion becomes more and more involved in Clamence's narrative, going to the extreme of visiting the man at home where he lies nursing a high fever.

Walking with his companion after their first meeting, Clamence introduces a few subjects which will carry through to the end: the double nature and the violence of modern man as well as the resemblance of Amsterdam to Dante's Inferno. This talk is meant to reinforce the idea established by the book's title: The Fall. Clamence and his companion are members of a fallen society existing in a forsaken world.

With only very rare interruptions from his companion - interruptions that are not reproduced in the text - Clamence goes on to give an account of his life and philosophies. He explains his belief in the necessity of slavery, his cynical views about human relationships, and his lack of religion. Despite what it seems at the outset, Clamence's primary goal is not confession and certainly not absolution. As a judge-penitent, he is the one to decide both his blame and his punishment. Clamence's real intention is to dishearten anyone with whom he comes into contact through the telling of his wretched story.

He was, he tells his companion, a defense attorney in Paris specializing in particularly desperate cases - murderers who kill to gain notoriety, the poor, and the oppressed. He does not take these cases out of a sense of benevolence, but rather as a way of acquiring fame for himself. His ego is limitless and his sense of need to be adored overpowering. For a very long time, he lives without self-doubt - utilizing his considerable natural gifts to maintain a sense of success. One night, however, he is the sole witness when a young woman throws herself from a bridge to her death. This is a turning point for Clamence. Though he wants to save the young woman, he finds himself paralyzed by fear. For the first time in his life he realizes the extent of his own weakness. Certainly this incident continues to haunt Clamence through the rest of the text, but it is only when combined with another episode that the woman's suicide becomes so destructive to Clamence's frail skeleton of conceit and self-righteousness. On another night, crossing another bridge, Clamence hears laughter behind him. Turning, he sees no one. This signals a change in Clamence's frame of mind - the full implications of which even Clamence himself may not realize. Because the laughter does not come from anyone outside of him, it must be instead an echo of his own mind. Clamence has begun to see himself as ridiculous. Naturally, he fights this understanding with all of the weapons in his arsenal, but ultimately the laugh wins out. In the final pages of the text, Clamence reveals that - despite everything he thinks he has gained - he still hears the laughter now and again.

The Fall ends with a very ill Jean-Baptiste Clamence explaining, finally, his whole purpose of raising himself up by putting others down. Having learned the secret of his own form of happiness, Clamence indulges himself in everything, every impulse - even the possession of a stolen painting from a 15th century altarpiece. Most importantly, however, Clamence finally feels adored.

More summaries and resources for teaching or studying The Fall.

The Fall from BookRags. (c)2022 BookRags, Inc. All rights reserved.