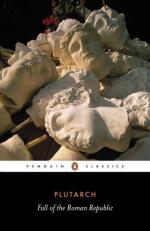 Fall of the Roman Republic Summary & Study Guide includes comprehensive information and analysis to help you understand the book. This study guide contains the following sections:

This detailed literature summary also contains Topics for Discussion and a Free Quiz on Fall of the Roman Republic by Plutarch.

Rex Warner, the translator, begins the story of Marius by saying that Plutarch's biography of Marius is the least satisfactory of the six lives covered because Plutarch writes little about Marius' political skill. Warner says the significance of Marius' marriage to Julia of the house of Caesar is obscured while his lack of education is greatly exaggerated. This begins a series of six historical accounts of men who played an important role in Rome's history. Marius, Crassus, Pompey, Cicero, Caesar and Sulla each have a chapter of their own. In each, details of the man's early life and his appearance are included, though the majority of each section is devoted to the political and military campaigns that made them great.

Marius is elected to several offices, including consul. He is a brilliant military leader. As his men march toward battle, Marius trains them, forcing long marches and even requiring that the men carry their own gear—prompting the saying that one is as capable as "Marius' mules" which refers to his men. However, he does not require anything of them that he is not willing to do himself, as is noted early in his military career. His men, though possibly complaining about the training, are thoroughly ready to meet their enemies and emerge victorious.

Sulla serves under Marius, gaining his initial military skills there. When Sulla himself comes to power in Rome, Marius is among those listed as exiles. Though Marius himself had previously been in control of Rome, Sulla's arrival heralds—at least for some—a calmer command. Cicero, who had fled the city under Marius' reign, returns when Sulla comes to power. Cicero is intelligent but his chief fault is that he touts his own victories over and over, until most are tired of listening to him. Cicero is in power when Caesar, just a youth himself, is likely involved in a plot against the senate. Cicero does not prosecute Caesar, knowing that the young man is so popular that the entire band of conspirators would be acquitted if Caesar is among them.

Caesar was popular—so much so that upon his death a group of people rush to burn the homes of the murderers and inadvertently kill a man who was not among the murderers at all. Caesar is also a brilliant military man, so much so that his men seek to serve him when they object that their bodies are beyond the ability to continue. Caesar is not the only one who inspires this kind of service. Crassus, upon being handed over to those who would soon kill him, call on the witnesses to take word back to Rome that he was killed not by the actions of his own countrymen but by his enemies. When he is led out and it is likely that he is to be killed, several of his loyal leaders refuse to allow him to go alone and are also killed.

Pompey also serves under Sulla and soon becomes known for his justice and humanity. He earns Sulla's respect though is soon at odds with other young men of power because of Sulla's tendency to defer to Pompey and to show him respect.

All six lives are intertwined, some so subtly that it is difficult to make the connection and some that remain so after death. For example, it is noted that Antony is at the heart of the plot to kill Cicero. After Cicero's death, his son serves with the younger Caesar and it is during his reign that the senate takes down all honors to Antony—making Cicero's family responsible for the final act of punishment for Antony.

Fall of the Roman Republic from BookRags. (c)2022 BookRags, Inc. All rights reserved.