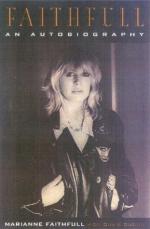 This detailed literature summary also contains Topics for Discussion and a Free Quiz on Faithfull by Marianne Faithfull.

Faithfull is the autobiography of Marianne Faithfull. Throughout the book, she discusses her days spending times with the Rolling Stones. From the middle of the 1960s until 1970, she had a relationship with Mick Jagger. She was perhaps best known for her relationship with this famous figure. During part of that period, they lived in a house together. Marianne discusses the details of her relationship with Mick and the reasons for their eventual breakup. She spent a good part of this time on drugs. Further, Marianne was extremely sexually promiscuous and she writes candidly about her sex life with various members of the Rolling Stones and other people as well.

The book starts as Marianne discusses her childhood years. She was raised by her mother Eva von Sacher-Masoch. Her mother had roots as an aristocrat and had been a ballerina. Her mother's great grandfather was Leopold von Sacher-Masoch who wrote the book "Venus in Furs," which coined the term "masochism." Marianne's father was a British officer and also a psychology professor. Her parents split up when Marianne was quite young. She ended up living with her mother in a very poor neighborhood in England. She always knew that she wanted to be some sort of artist.

When Marianne was only about 19, she began traveling in artistic circles in London. She also met her first husband John Dunbar. Shortly thereafter, she also gave birth to his son. Marianne was discovered by the producer of the Rolling Stones Andrew Oldham. She met him attending a release party for an up-and-coming artist. Andrew brought Marianne immediately to Olympic Studio and she recorded the song "As Tears Go By." The song was written by Keith Richards and Mick Jagger.

When she split up with her husband, Marianne stayed for some time with Brian Jones from the Rolling Stones and his girlfriend Anita Pallenberg. Anita and Marianne became life-long friends. Marianne describes the details of her drug use and various escapades spending time with the Rolling Stones and their entourage. As Mick Jagger's girlfriend, she was under constant media scrutiny. The stress from the press attention provoked her to hide more and more deeply in the world of drugs.

When Mick Jagger and Marianne broke up in the 1970's, she lost custody of her son. During this time, her career and her health spiraled downwards. She lived on the streets for two years doing heroin. Eventually she got enrolled in a National Health program where she could get her drugs legally. Luckily, she was retrieved from living on the streets and brought back into the world of music. The constant drug abuse lowered the pitch of her voice and changed it significantly. She began recording new albums and released several. Marianne was still abusing drugs, but she was happy to have found her own identity, apart from solely being known as Mick's girlfriend. Perhaps Marianne's most popular record was Broken English.

The final chapters of Faithfull describe Marianne's eventual success in getting off of drugs. Part of the success stemmed from being at Hazelton rehab clinic in Minnesota for 6 months. While she was at the clinic, she met and fell in love with Howard Tose who was also a drug addict with severe mental issues. Howard ended up committing suicide. This event deeply impacted Marianne and further helped her understand her drug dependency. Marianne candidly discusses her drug addiction and the various realizations that helped her break her dependency.