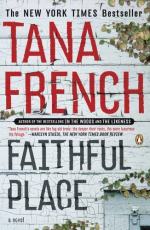 Tana French
This Study Guide consists of approximately 35 pages of chapter summaries, quotes, character analysis, themes, and more - everything you need to sharpen your knowledge of Faithful Place.

This detailed literature summary also contains Topics for Discussion and a Free Quiz on Faithful Place by Tana French.

Frank Mackey is a police officer who has every weekend with his daughter, Holly. On a particular weekend, Frank picks up Holly as usual but receives a phone call from his sister, Jackie. Frank had left home at an early age and has cut ties with all his family except Jackie. Jackie says that a suitcase belonging to Rosie Daly, Frank's childhood sweetheart, has been found.

Frank remembers a great deal of chaos and abuse at the hands of his parents. Frank and Rosie planned to leave together. Frank waited but Rosie never showed up. Frank believed that Rosie had changed her mind but much later learns that his brother, Shay, had killed her. Shay had considered himself the protector of the younger children of the family and was on the verge of moving out when he learned that Frank was planning to leave. Shay tried to talk to Rosie, but she refused to listen, enraging him to the point that he killed her. Shay returns home, believing that Frank will give up the idea of leaving if Rosie doesn't show up. Frank finds a note that makes him believe that Rosie had changed her mind and left without him.

Frank returns to the neighborhood to decide what to do about the finding of Rosie's suitcase. He knows that she probably packed the suitcase so she could get out of the house more quietly without the extra burden. He remembers back to the night they were supposed to meet and recalls a noise that he'd heard coming from the abandoned house. Frank had, at the time, figured the noises were that of a couple in the throes of passion. On a hunch, he goes into the abandoned house, discovers a loose concrete slab and finds a body there.

Police later confirm that it's Rosie Daly and Frank sets out to find out what happened to her. Meanwhile, he's reconnecting with his family including his younger brother Kevin. Kevin calls Frank several times one evening but Frank ignores the calls. The next morning, he learns that Kevin was killed in that same abandoned house. It seems that Kevin has committed suicide out of guilt over having killed Rosie but Frank doesn't believe that theory. Meanwhile, he learns that Holly has been secretly visiting the Mackeys with her Aunt Jackie and with her mother's permission. By the next Sunday, Frank has come to the conclusion that Shay is to be blamed for the murder of both Rosie and Kevin but isn't yet certain what he's going to do with that knowledge. Frank and Holly visit the Mackeys together and Frank overhears a conversation between Holly and Shay indicating that Holly had seen a note that led her to the conclusion that Shay was the killer. Frank confronts Shay who confesses but believes the evidence won't be there to prosecute him. Frank calls a fellow officer who makes the arrest based on the evidence Frank has collected and the promise of Holly's testimony.

More summaries and resources for teaching or studying Faithful Place.