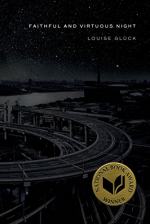 Louise Glück
This Study Guide consists of approximately 44 pages of chapter summaries, quotes, character analysis, themes, and more - everything you need to sharpen your knowledge of Faithful and Virtuous Night.

This detailed literature summary also contains Quotes and a Free Quiz on Faithful and Virtuous Night by Louise Glück.

The following version of this book was used to create this study guide: Gluck, Louise. Faithful and Virtuous Night. Farrar, Straus, and Giroux. 2014. First Edition.

For the purposes of this analysis, the summary of each poem in the collection begins with a brief outline of its stylistic elements. A “/” in a quote defines a line break in the original text, while punctuation, or lack thereof, within quotes from the text is indicative of punctuation within the original. It is important to note that the collection itself contains no divisions: separating the poems into sections is for the purposes of this analysis only.

The collection begins with a poem called “Parable,” which describes the struggle of a group of travelers about to leave on a journey to decide whether that journey is going to have a purpose. Their discussions last so long that they never actually leave. The poem, however, suggests that the fact that they have moved through time (that is: that they have aged) rather than through space (that is: from place to place) is itself a journey, with or without a purpose. All this establishes the narrative and thematic tone to the collection, its remaining poems all, in one way or another or to one degree or another, exploring the idea of life as a journey, ultimately with the destination of death.

Several of the collection’s poems are anchored in the story of a particular individual – a man whose childhood is defined by the death of his parents; whose adulthood is defined by various experiences of creating art; and whose late adulthood, or becoming an elder, is defined by increasing awareness of impending death. Several members of the man’s personal circle appear in the poems exploring his life: his aunt, who raised him; his brother (whom he visits in America as an adult) and nephew (his brother’s son); and his friends, several of whom participate in his discussions and contemplations of art.

Meanwhile, echoes and perhaps even aspects of the man’s journey appear in poems in which he, specifically, is not a character, but in which the experiences of the characters that do appear have clear echoes of his. “Utopia,” for example, explores the experiences of a young girl at a train station, accompanied by an older woman as she (the girl) prepares to travel alone on a visit to her grandmother. There is a clear sense here that the girl’s experience is similar to that of the man – the older woman, for example, feels very much like she could be similar to the man’s aunt. All this makes the centrally thematic suggestion that while each individual life, and experience of life, is unique, there are resonances and similarities between those individual journeys – or, to extend the metaphor in the same way the collection seems to, that the experience of life as a journey is universal to everyone.

The collection also contains lingering, repeatedly developed images of death. First, the childhood and youth of the young man (and of other characters who, like the girl in “Utopia,” seem to share his experiences and perspectives) are haunted by memories and/or dreams of his dead parents. Then, as various characters (including the man) experience maturity, they also experience a sense of death coming closer – or rather, of coming closer to death. Finally, the man actually matures, or ages, into his deathbed, with the novel’s final poems (even with their echoes of experiences while he was alive) perhaps even suggesting his experiences of an afterlife.

Throughout the collection, in both the narratively oriented poems (i.e. those connected with the story / journey of the young man) and in those that seem more to stand alone, connections are drawn between the poems and various aspects of myth. Perhaps the most obvious, and the most specific, of these connects the poems and the journeys they explore to the story of Britain’s King Arthur, whose life and story were defined by his quest for a particular artifact that he believed would draw him closer to God. But there are several, less specific references to the idea of the mythic nature of the journey of life. This is the idea that in the same way as myths are stories of universal human experiences, the poems here, whether they evoke the story of a single individual or the experiences of people who are akin to those of that single individual, are actual stories of a similarly universal experience, as referenced above: specifically, the movement of life towards death.

More summaries and resources for teaching or studying Faithful and Virtuous Night.