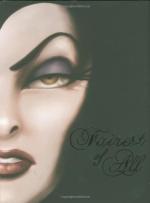 Plot Summary
+Chapters Summary and Analysis
Chapters 1 & 2: Rose Petals, Kisses & Cake, Dragons and Knights
Chapters 3 & 4: Mirror Mirror & Apple Blossoms
Chapters 5 & 6: A Trick of the Light & The Odd Sisters
Chapters 7 & 8: Mirrors and Light & The Man in the Mirror
Chapters 9 & 10: The Maker of Mirrors & The Shattering of a Soul
Chapters 11 & 12: Farewells & The Queen in Solitude
Chapters 13 & 14: Envy & Innocence Charmed
Chapters 15 & 16: A Return & Torment
Chapters 18 & 19: Dream Sickness & A Foul Possession
Chapters 20 & 21: The Huntsman & The Hag and the Apple
Chapters 22 & 23 & Epilogue: The Crone, the Clearing, and the Cottage & The Cliff
Characters
Objects/Places
Themes
Style
Quotes
Topics for Discussion
Order our Fairest of All: A Tale of the Wicked Queen Study Guide

Related Topics
The Beast Within: A Tale of Beauty's Prince

Fairest of All: A Tale of the Wicked Queen Summary & Study Guide

Serena Valentino
This Study Guide consists of approximately 39 pages of chapter summaries, quotes, character analysis, themes, and more - everything you need to sharpen your knowledge of Fairest of All.

Fairest of All: A Tale of the Wicked Queen Summary & Study Guide Description

Fairest of All: A Tale of the Wicked Queen Summary & Study Guide includes comprehensive information and analysis to help you understand the book. This study guide contains the following sections:

This detailed literature summary also contains Topics for Discussion on Fairest of All: A Tale of the Wicked Queen by Serena Valentino.

The novel opens on the day of the King and Queen's wedding. The Queen is overwhelmed with happiness: she is marrying the man of her dreams and becoming the mother to his beautiful four-year-old daughter, Snow White. She is surrounded by a country of people who admire her beauty and adore her as their Queen. The Queen grew up in a unloving home. Her mother died in childbirth and her father seems to have hated her since the moment she was born. He despises the Queen for killing her mother and he has reminded her how useless, ugly, and horrible she is every day of her life. Her father was a respected mirror maker, and when the Queen is married, the King arranges for a beautiful mirror from her father's shop to be presented to the Queen as a wedding gift: a beautiful memory of her now deceased father. Even though the Queen is overwhelmed by happiness, the mirror gives her an uneasy feeling of dread that threatens to ruin her day.

In the days that follow, happiness fills the castle as the new family enjoys their lives together. The Queen wholeheartedly embraces her role as Snow White's stepmother and the two form a loving, supportive relationship: they truly act like mother and daughter. Their happiness is shattered when their land goes to war and King must support his troops in battle. He comes and goes in and out of their lives during the first few years of marriage, until one horrible day when he doesn't come home at all. The news of her husband's death shatters the Queen. Initially, she and Snow White cling to each other: the only family they have left. The Queen becomes fiercely protective of her daughter, refusing to let anyone upset her. When the King's three strange cousins come to visit, the Queen banishes them from the castle for teasing Snow White. The cousins speak cryptically, as if they are cursing the Queen and her household.

Around the same time, the giant mirror the Queen had hidden away after her wedding day reappears at the foot of her bed. When the Queen unwraps it, she sees a familiar face swirling in the glass: her father's face. Her father, who calls himself as the Queen's Slave, says that he can see throughout the entire land and can answer any of the Queen's questions. He is bound to tell her the truth, regardless of how painful it may be for him. Distraught, the Queen clings to the only thing she knows to be true. That she is beautiful. She has never heard her father say that he loves her or that she is beautiful and she is desperate for affection. She stares into her father's eyes and asks, "Mirror, Mirror on the wall, who's the fairest of them all?" Bound to tell the truth, her father must admit that the Queen is the fairest in the land. Each day the Queen wakes and asks the mirror who is the fairest in the land, and each day, the mirror replies that she is. Even though hearing her father admit that she is beautiful should please the Queen, she becomes obsessed with the question, obsessed with the new control she has over her father.

And then one day everything changes. The mirror answers that Snow White is the fairest in the land. The Queen is crushed. She has lost everything good in her life: her mother, her husband, and now, her beauty. It is the last thing she can control and her obsession has hardened her heart. Using black magic that she learns from the King's strange cousins, the Queen poisons an apple and feeds it to Snow White, sending her into a deep sleep that can only be broken by love's first kiss. Seeing her daughter lying close to death on the floor threatens to break the Queen's heart. She sees that love for her daughter is more valuable than her beauty. Devastated, she runs into the woods and jumps off a cliff. In the days that follow, Snow White's prince finds her, kisses her, and wakes her from her curse. The two are married and Snow White inherits the Queen's enchanted mirror. When she gazes upon it the first time, the face of the Queen appears. "I love you, my beautiful little bird," the Queen says to her daughter. "I always have, and I always will" (Pages 249 - 250).

More summaries and resources for teaching or studying Fairest of All: A Tale of the Wicked Queen.

Fairest of All: A Tale of the Wicked Queen from BookRags. (c)2022 BookRags, Inc. All rights reserved.