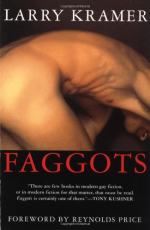 This detailed literature summary also contains Quotes and a Free Quiz on Faggots by Kramer, Larry.

The narrative follows its large cast of characters through a series of vignettes of varying lengths, without divisions of part, section, or chapter. The term “faggot” is used in this analysis as it is used in the book – as a term used by male homosexuals of the period to refer to themselves and each other.

Following a brief commentary on how many hundreds of thousands of “faggots” there are in New York City at the time at which the novel is set, the narrative introduces its central character and protagonist. Fred Lemish is about to turn 40 years old: he is desperate to remain physically attractive to those other hundreds of thousands of faggots, and is a similarly desperate believer that love can bring happiness that goes beyond the sexual … happiness he also happens to believe can emerge as a result of the sexual.

Many of the faggots of Fred’s acquaintance, characters appearing throughout the novel, share this perspective. One of these is teenaged Timmy, a physically beautiful faggot from a small town who arrives in New York and who, in the middle of painful experiences of being sexually exploitive, believes that he finds the love of his life. There is also Jack, nicknamed Laverne, who is almost as desperate as Fred is to leave the life of a promiscuous partier behind and settle down with a beloved.

On the other side of the coin – a side celebrating what is perceived to be the pure freedom and self-fulfillment of sexual promiscuity – are characters like Dinky, with whom Fred is in love but who believes that Dinky is most fulfilled when various orifices are being filled by various appendages. There are also characters like Randy Dildough, Leather Louie, Lance Heather, and Feffer (Fred’s ex-boyfriend), whose explorations of sexual freedom take them into sado-masochistic experimentations that seem to have little to do with love and more to do with something darker.

Somewhere between these poles on the faggot continuum are characters like Richard (Boo Boo) Bronstein. His self-hatred is portrayed as being connected to not only being a faggot, but also to having been rejected by his businessman father, a rejection he shares with Fred who was also rejected by HIS father. Then there is Anthony, who is portrayed as needing substantial “encouragement” from marijuana in order to enable enjoyment of faggot sexuality. There are also several other characters, some glimpsed briefly and some developed in a degree or two of additional depth, who likewise fall somewhere on the continuum between Fred’s (perhaps idealistic) search for transcendent emotional experience and Dinky’s (perhaps self-destructive) search for transcendent sexual experience.

As the narrative moves through a kaleidoscopically-portrayed series of parties, sexual encounters, and memories, it is loosely anchored by the story of Fred’s emerging self-awareness, contrasted with the self-delusion of the other characters. Finally, as the novel draws to its close in the aftermath of an intensely sexualized party on Fire Island (the real-world center of male faggot activity in New York, then and now), Fred turns 40. At the same time, he finally realizes that his search for love has finally led him into an understanding that there are, in fact, different kinds of love, not just that associated with long-term connection. He also realizes that in some way, in the midst of all his sexually-oriented searching for that kind of love (a substitute for the love which, he realizes, he never got from his father), he has, in fact, been loved, by faggots and in their particular way, all along.