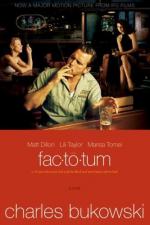 Charles Bukowski
This Study Guide consists of approximately 41 pages of chapter summaries, quotes, character analysis, themes, and more - everything you need to sharpen your knowledge of Factotum.

This detailed literature summary also contains Topics for Discussion and a Free Quiz on Factotum by Charles Bukowski.

Factotum by Charles Bukowski has Henry Chinaski telling the story of how, in a perennial alcoholic fog, he drifts from city to city, trying and discarding jobs and women.

Henry Chinaski arrives in New Orleans, depressed, hoping a new city will make a difference. This is unlikely, as Henry likes his wine, dislikes the humdrum existence of a paying job and drifts along mildly suicidal and solitary. He quickly goes through a job and catches a westbound train as part of a section gang. He abandons that job during a stopover in his hometown, Los Angeles. Life with his parents instantly goes bad as he goes drinking and lands in jail. Henry moves to a rooming house, where a prostitute viciously rapes him. Henry escapes to New York City, which he hates intensely. He quits one job and another that exhausts him physically, and moves to Philadelphia. There, in a crowded bar, Henry washes Venetian blinds, unexpectedly makes friends, and demonstrates generosity with his modest earnings. Henry reaches St. Louis in the dead of winter, feeling depressed, but again finds relative happiness among friendly people. While there, he achieves his first literary triumph, selling a short story to a prestigious magazine.

Henry returns to Los Angeles and Fate introduces him to an eccentric millionaire who needs the services of a librettist. Life becomes a round of food, liquor, and sex until the benefactor dies. Henry seems sad to part with Laura, but soon meets Jan, a prettier version of Laura, although oversexed, argumentative, and compulsively unfaithful. Henry gets a raise from his boss in a bicycle warehouse when he shows he can keep quiet about petty larceny. As a bookie, Jan finds him less desirable. Long lunches and leaving early for the track loses another job for Henry, and with World War II over, jobs become scarcer. Henry and Jan live on the betting bankroll, have sex, drink prodigiously and bail each other out of jail.

When Henry dreams that he has killed a man at the racetrack for taking their seats and flirting with Jan, he decides he must get away to Miami. Acrophobia and distaste for manual labor again cost him jobs, and he returns to Los Angeles, where he reunites with Jan. After catching crabs from her, Henry doubles the time prescribed for the cure, badly burning his abdomen, legs and genitals. Having found a janitorial job that starts that night, he lets Jan playfully bandage him to where he can endure clothing. Henry humanely makes sure the bathrooms have enough toilet paper but otherwise shows no penchant for mopping, washing and polishing. He is fired for sleeping on the job and resumes his reluctant quest for employment. The only job he has enjoyed in life is driving for the Red Cross during the war. He is gaining enthusiasm about driving for Yellow Cab when his criminal record disqualifies him. On the next job, he seduces another secretary, talks with a Frenchman who has met Picasso, and is fired for having sex in the warehouse with a newly hired Japanese woman. It happens that throughout his life Japanese women have held an almost mystical place in his heart. Henry goes through a few more jobs, is evicted, splits with Jan, and uses most of his remaining money to watch an aging stripper whose act cannot get him up.